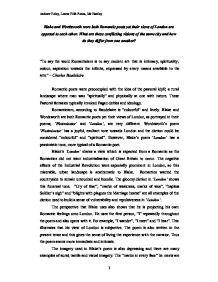 &quot;To say the word Romanticism is to say modern art- that is intimacy, spirituality, colour, aspiration towards the infinite, ex

Blake and Wordsworth were both Romantic poets yet their views of London are opposed to each other. What are these conflicting visions of the same city and how do they differ from one another? "To say the word Romanticism is to say modern art- that is intimacy, spirituality, colour, aspiration towards the infinite, expressed by every means available to the arts." - Charles Baudelaire Romantic poets were preoccupied with the idea of the pastoral idyll; a rural landscape where man was "spiritually" and physically at one with nature. These Pastoral fantasies typically invoked Pagan deities and ideology. Romanticism, according to Baudelaire is "colourful" and lively. Blake and Wordsworth are both Romantic poets yet their views of London, as portrayed in their poems; 'Westminster' and 'London', are very different. Wordsworth's poem 'Westminster' has a joyful, exultant tone towards London and the diction could be considered "colourful" and "spiritual". However, Blake's poem 'London' has a pessimistic tone, more typical of a Romantic poet. Blake's 'London' shares a view which is expected from a Romantic as the Romantics did not want industrialisation of Great Britain to occur. The negative effects of the Industrial Revolution were especially prominent in London, so this miserable, urban landscape is anathematic to Blake. Romantics wanted the countryside to remain untouched and bucolic. The gloomy diction in 'London' shows this funereal tone. "Cry of fear", "marks of weakness, marks of woe", "hapless Soldier's sigh" and "blights with plagues the Marriage hearse" are all examples of the diction used to build a sense of vulnerability and repulsiveness in 'London'. ...read more.

This idea is reinforced by the fact that in this stanza, if the first letter of every word, on every line is taken, the word "HEAR" can be made, this also highlights the aural imagery used in this stanza. The word "appals" may also echo the largest symbol of religious power in London, St Paul's Cathedral and this suggests that Blake is questioning why the church has not spoken out against the government. Unlike the third, the fourth stanza is focused on the future of London. This is because the "infant" described has a future and eventually the infants in London will become adults who will have to take part in the daily running of the city. However, unlike Blake and other Romantics, Wordsworth's 'Westminster' has a surprisingly optimistic tone for a poem written by Romantic. This joyful tone is shown in the diction and imagery he uses. Such as, "beauty of the morning", "sun more beautifully" and "calm so deep" are all examples of the lauding diction that Wordsworth uses. His exultant view towards the city is also shown in the form in which his poem is constructed. The rhythm is an iambic pentameter and the first eight lines have a rhyme scheme which is ABBAABBA, an octet, then the last six lines have a different rhyme scheme which is CDCDDC, a sestet. This octet and sestet suggests his powerful feelings towards London as it is a sonnet, and sonnets are usually associated with love and desire. ...read more.

This gives the impression that the city is a peaceful place. Wordsworth also uses other techniques to praise London apart from personification. On the last line, the poet uses a metaphor to describe London. He says "And all that mighty heart is lying still!" The "mighty heart" is a metonymy for London and he describes the city as being "still", this further leads the reader to believe that this is set in the early morning when even "the very houses seem asleep". This adds further evidence that London was calm and tranquil at this particular moment. Although it seems unusual for a Romantic to write such an optimistic poem about London, the specific time, date and place: "Composed Upon Westminster Bridge, September 3, 1802" is a message to the reader that the poet remains a Romantic yet could not help but succumb to this particularly powerful vision of beauty. By creating such a precise title, Wordsworth attempts to explain that any Romantic would have felt the same way and therefore, it is not meant to be unexpected; he attempts to explain that this experience was an anomaly. Although it seems that Blake only saw a certain, lower class part of London where soliciting and disease thrived alongside especially harsh working conditions for children, Blake's poem, 'London' is typical of a Romantic poet who was opposed to the Industrial Revolution and therefore, this justifies the reason for him writing such a negative poem, since the Romantics were preoccupied with the idea of a bucolic landscape. ?? ?? ?? ?? Andrew Foley, Lower Fifth Penns, Mr Hartley 1 ...read more.