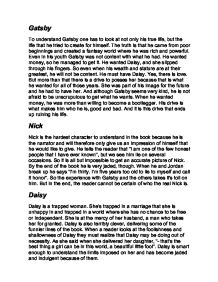 To understand Gatsby one has to look at not only his true life, but the life that he tried to create

Gatsby To understand Gatsby one has to look at not only his true life, but the life that he tried to create for himself. The truth is that he came from poor beginnings and created a fantasy world where he was rich and powerful. Even in his youth Gatsby was not content with what he had. He wanted money, so he managed to get it. He wanted Daisy, and she slipped through his fingers. So even when his wealth and stature are at their greatest, he will not be content. He must have Daisy. Yes, there is love. But more than that there is a drive to posses her because that is what he wanted for all of those years. ...read more.

Nick Nick is the hardest character to understand in the book because he is the narrator and will therefore only give us an impression of himself that he would like to give. He tells the reader that "I am one of the few honest people that I have ever known", but we see him lie on several occasions. So it is all but impossible to get an accurate picture of Nick. By the end of the book he is very jaded, though. When he and Jordan break up he says "I'm thirty. I'm five years too old to lie to myself and call it honor". So the experience with Gatsby and the others takes it's toll on him. ...read more.

As she said when she delivered her daughter, "- that's the best thing a girl can be in this world, a beautiful little fool". Daisy is smart enough to understand the limits imposed on her and has become jaded and indulgent because of them. The word careless also describes Daisy well. Many of the things that Daisy does, the accident with Myrtle in particular, show a woman who is just careless. She has become very much wrapped up in herself. Part of this is due to the fact that she had been spoiled all her life. She was born into money and had an endless assortment of men who would continue to spoil her. So she has learned to think only of herself without regard for the people that it may hurt ...read more.

This question asks candidate to analyse the characters in 'The Great Gatsby', though the candidate here has missed a few large characters worthy of commentary. Choosing only to analyse Gatsby, Nick and Daisy is verging on ridiculous, and they should've ...

This question asks candidate to analyse the characters in 'The Great Gatsby', though the candidate here has missed a few large characters worthy of commentary. Choosing only to analyse Gatsby, Nick and Daisy is verging on ridiculous, and they should've commented on Tom Buchanan, Myrtle Wilson, George Wilson and quite possibly the minor characters like Meyer Wolfshiem, Jordan Baker and even Dr. T. J. Eckleberg. It would serve the candidate and all future candidates in good stead to make sure they have a sound understanding of the characters; their relationships with other characters; and what truth about them we can decipher in Carraway's narration. Here there is consistent focus on the three characters chosen for analysis, but very little is said that pushes this essay much higher than a low C grade.

The Level of Analysis is very basic, but covers a nice range of characteristics, even if some glaring omissions lower the grade somewhat. The understanding of Gatsby's character is apparently flawed as it does not appreciate that everything Gatsby has done since he left home at the age of 17 is vying for the requited affection of Daisy Buchanan. Saying "He [Gatsby] wanted money, so he managed to get it" does not appreciate that Gatsby did not originally want money - he wanted Daisy first and foremost, and seeked excessive fortune by dabbling in illegal alcohol trafficking in order to get it, so Daisy would notice him (Daisy declined his marriage proposal because she would have no secure future with a man who had nothing).
Any good analysis of Nick Carraway should at least mention the phrase "unreliable narrator", but at leas this candidate recognises that what we read from Carraway's perspective is not entirely factual, though calling him a liar is stretching it a little bit. But the candidate did well to recognise that for the most part, and even with Carraway narrating and telling us about himself regularly, that he is very much an enigma.
The analysis of Daisy is slightly skewed as well, with far too much blame put on her shoulders for things that weren't part of her control. Interpretation plays a part in this, but objectivity must also be upheld and Daisy did not willingly reject Gatsby because she did not love him - she just wanted a secure future and Tom Buchanan could offer it.

The Quality of Written Communication is fine. There is very little experimentation with varying sentence structure and more complicated syntax and punctuation, but in doing this the candidate does well to make no errors in spelling, punctuation or grammar.