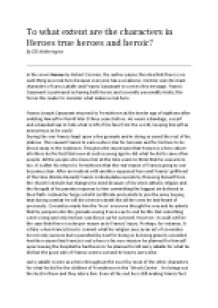 To what extent are the characters in &quot;Heroes&quot; by Robert Cormier true heroes and heroic?

﻿To what extent are the characters in Heroes true heroes and heroic? By Elli Hetherington ________________ In the novel Heroes by Robert Cormier, the author passes the idea that there is no such thing as a real hero because everyone has a weakness. Cormier uses his main characters of Larry LaSalle and Francis Cassavant to convey this message. Francis Cassavant is portrayed as having both heroic and cowardly personality traits, this forces the reader to consider what makes a real hero. Francis Joseph Cassavant returned to Frenchtown at the tender age of eighteen after enlisting himself in World War 2 three years before. He wears a bandage, a scarf and a baseball cap to hide what is left of his face from the world, keeping himself as anonymous as he could. During the war Francis leapt upon a live grenade and in doing so saved the rest of his platoon. ...read more.

Cowardice made him the 'hero' everyone thought he was and he admits that he jumped onto the grenade seeing it as a way to end his life. But something went wrong and only his face was blown up-he survived. However, it could well be the case that there is a deeper reason as to Francis? injury. Perhaps, for instance, it is fate: when Francis tries to commit what his religion sees as an act of cowardice he not only survives but is punished by God for doing so by being gravely wounded. Another reason that Francis is not a hero is his new mission he planned for himself upon leaving the hospital he had been in: he planned to kill Larry LaSalle for what he did but the good side of Francis comes out and he leaves Larry alive. Larry LaSalle is seen as a hero throughout the novel by most of the other characters for what he did for the children of Frenchtown in the 'Wreck Centre'. ...read more.

When left alone Larry raped Nicole whilst Francis stood just outside the door in the darkness. This act strips away the idea of Larry being a hero. Larry leaves Frenchtown to go back to the war that night. Another person that could be classed as a hero is Arthur Rivier. Arthur was another man from Frenchtown who enlisted in World War Two when people were needed. He doesn't receive much recognition for his participation in the war and when he returns he feels depressed by the fact that no-one will talk about the war whilst denying that he ever was a war hero. ?We weren?t heroes. We were only there.? But after all that Arthur could be a true hero. He went to war to help his country, didn't receive any additional awards or recognition whilst also admitting that he was scared for what was happening at the time. He just wants to talk about it. ...read more.