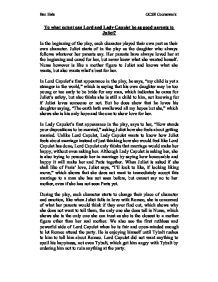 To what extent can Lord and Lady Capulet be as good parents to Juliet?

To what extent can Lord and Lady Capulet be as good parents to Juliet? In the beginning of the play, each character played their own part as their own character. Juliet starts of in the play as the daughter who always follows whatever her parents say. Her parents have always loved her at the beginning and cared for her, but never knew what she wanted herself. Nurse however is like a mother figure to Juliet and knows what she wants, but also wants what's best for her. In Lord Capulet's first appearance in the play, he says, "my child is yet a stranger in the world," which is saying that his own daughter may be too young or too early to be bride for any man, which indicates he cares for Juliet's safety, but also thinks she is still a child to him, not knowing for if Juliet loves someone or not. ...read more.

During the play, each character starts to change their place of character and emotion, like when Juliet falls in love with Romeo, she is concerned of what her parents would think if they ever find out, which shows why she does not want to tell them, the only one she does tell is Nurse, which shows she is the only one she can trust as she is the closest to a mother figure other than her real mother. We also see the first ruthless and powerful side of Lord Capulet when he is fair and open-minded enough to let Romeo attend the party. He is enjoying himself until Tybalt rushes to him to tell him about Romeo. Lord Capulet did not want anything to spoil his happiness, not even Tybalt, which got him angry with Tybalt by ordering him not to ruin anything at the party. ...read more.

Not only was Lord Capulet shocked by this, but was furious that her daughter was not obeying what he set out himself just to make her happy, or what he thought would make her happy. After caring for her and giving all he could, he is upset in the way Juliet has said no and now wishes she was never born. Nurse was frightful of what would happen if Juliet did not go along with the wedding after seeing how much power Lord Capulet has over her, she did not want her hurt at all, which is why she wants what's best or her. I think Lord and Lady Capulet could make better parents to Juliet. Although they love her, they need to know and understand what she wants instead of making what they think is good for her, Lady Capulet should come into Juliet's life more than Nurse as she is her real mother. And Lord Capulet should ask what Juliet wants instead of making her do what he thinks is best in his power. Ben Hale GCSE Coursework ...read more.