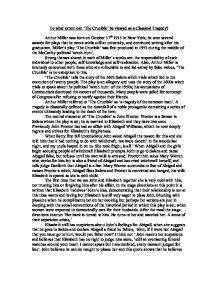 To what extent can 'The Crucible' be viewed as a Classical Tragedy?

To what extent can 'The Crucible' be viewed as a Classical Tragedy? Arthur Miller was born on October 17th 1915 in New York; he won several awards for plays that he wrote while still at university, and continued writing after his graduation. Miller's play 'The Crucible' was first produced in 1953 during the middle of the McCarthy political 'witch-hunt'. Strong themes shared in each of Miller's works are: the responsibility of each individual to other people, self-knowledge and self-realization. Also, Arthur Miller is intensely concerned with those who are vulnerable to and led astray by false values, 'The Crucible' is no exception to this. 'The Crucible' tells the story of the 1692 Salem witch trials which led to the execution of twenty people. The play is an allegory and uses the story of the 1600s witch trials to speak about the political 'witch hunt' of the 1950s; his accusations of Communism destroyed the careers of thousands. Many people were jailed for contempt of Congress after refusing to testify against their friends. Arthur Miller referred to 'The Crucible' as 'a tragedy of the common man'. A tragedy is classically defined as the downfall of a noble protagonist containing a series of events ultimately leading to the death of the hero. The central character of 'The Crucible' is John Proctor. Proctor is a farmer in Salem where the play is set; he is married to Elizabeth and they have two sons. Previously John Proctor has had an affair with Abigail Williams, which he now deeply regrets and strives for Elizabeth's forgiveness. When Betty first fell unconscious John asked Abigail the reason for this and she told him that it had nothing to do with witchcraft, 'we were dancin' in the woods last night, and my uncle leaped in on us. She took fright, is all.' When Abigail and the girls begin accusing people of witchcraft Elizabeth prompts John to go to Salem and name Abigail false, but refuses until his own wife is arrested. ...read more.

I believe that Abigail is the evil influence in 'The Crucible', from the start of the play she wished Elizabeth Proctor dead, she drank blood, a charm to kill Goody Proctor and in the social period in which Abigail lived she would have believed that this would work. Abigail led the other children to cry witchcraft and cause the death or imprisonment of a great number of Salem's people. Throughout the play Abigail attempted to lead Proctor into committing lechery. But, although Abigail did wish Elizabeth Proctor dead I do not believe she wished to cause the death of so many other people, she did not initiate the fear of witchcraft in Salem and only began accusing others to escape from blame herself. Abigail's initial explanation for the events in the woods was common dancing, it was only after Hale accused Abigail of calling the devil after hearing of the dancing that Abigail began accusing others. Hale asked Abigail if she compacted with the devil, 'Did you call the devil last night?' frightened for herself Abigail responded, 'I never called him! Tituba, Tituba ...' this led to Tituba being accused and she, terrified for her life confessed herself to witchcraft, '(terrified, falls to her knees): No, no don't hang Tituba! I tell him I don't desire to work for him'. Tituba is asked to name others in league with the devil and seeing a chance to save herself she does so. Abigail sees Tituba confess and be forgiven, 'You have confessed yourself to witchcraft, and that speaks a wish to come to heaven's side. And we will bless you, Tituba', seeing her chanced to be viewed as pure and innocent again Abigail begins accusing others of witchcraft, Betty follows suit, a snowball effect follows and mass hysteria captures Salem. Abigail saw that she had to d**n others to save herself and once she had begun pretending it was too late to back out. ...read more.

Also before Elizabeth is accused of causing harm to Abigail by stabbing a poppet the film shows Abigail running in on the judges while they dine with a needle stuck into her stomach, the judges clearly believe that a spirit has caused this. By showing this the scene is made more dramatic and it also contrasts with a further adaptation to the text when Abigail goes to the judges claiming that she has been attacked by the spirit of a ministers wife, in this instance the judges do not believe her and send her away saying that she must be mistaken. This added scene gives a different interpretation of the judges than given in the text as here they show hypocrisy. Another adaptation to the text is that in the court scene when John Proctor names Abigail a w***e and the girls start screaming in supposed fear of Mary Warren's spirit the girls rush outside and into the sea as if in attempt to drown themselves. This makes this scene more dramatic and the girls more believable to the judge. Before leaving aboard ship another addition to the text is that Abigail visits John in his prison cell and offers to bribe his guards if she will flee with him on a ship, john tells Abigail that it is not on a ship that they will meet again but in h**l. This scene shows Abigail to be strongly in love with John as she would risk her life by attempting to bribe the guard for if they turned out honest she would be arrested whereas in the text Abigail appears cowardly fleeing Salem leaving the one who she is madly in love with to die. A final difference to the text is that the hanging of John Proctor is shown at the end of the film, he dies midway through saying the Lord's Prayer. Including the death of Proctor makes the ending more emotional for the audience and by showing John dying with prayer on his lips the film portrays him as the soul of goodness, dying like a saint. ...read more.