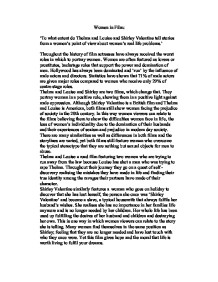 To what extent do Thelma and Louise and Shirley Valentine tell stories from a women's point of view about women's real life problems.'

Women in Film: 'To what extent do Thelma and Louise and Shirley Valentine tell stories from a women's point of view about women's real life problems.' Throughout the history of film actresses have always received the worst roles in which to portray women. Women are often featured as lovers or prostitutes, backstage roles that support the power and domination of men. Hollywood has always been dominated and 'run' by the influence of male actors and directors. Statistics have shown that 71% of male actors are given major roles compared to women who receive only 29% of centre stage roles. Thelma and Louise and Shirley are two films, which change that. They portray woman in a positive role, showing them in a positive light against male oppression. Although Shirley Valentine is a British film and Thelma and Louise is American, both films still show women facing the prejudice of society in the 20th century. In this way women viewers can relate to the films believing them to show the difficulties women face in life, the loss of women's individuality due to the domination of their husbands and their experiences of sexism and prejudice in modern day society. There are many similarities as well as differences in both films and the storylines are varied, yet both films still feature woman who overcome the typical stereotype that they are nothing but sexual objects for men to abuse. ...read more.

However, Shirley was always put down by her teachers who regarded her as less able than her friend Marjorie who they always praised. Some women may understand the neglect in Shirley's childhood, why she let go of her dreams and how she turned into the person she now is. This true-life experience makes women relive their past and understand how they have become the people they are today. When her friend Jane wins tickets to Greece Shirley sets off on a road of self-discovery, which will help to fulfil her dreams. Thelma and Louise is more of an action film and we understand each character by their actions, words and the way they interact. In both films we see abusive husbands. Thelma's husband Darryl is a dominating character who uses Thelma as a maid and may be being unfaithful; there is a suggestion that he may be having an affair. Many women can see themselves in Thelma's position, dominated by their husbands and treated unfairly. At first Thelma is seen as a typical southern housewife completely naive and inexperienced. While this may be a stereotypical character that may not appeal to a modern audience of women who consider themselves independent, it sets the scene for Thelma's progress in character and the change in her personality. At the beginning of the film we see Thelma trying to fit in and be comfortable in modern society yet the actions she makes are based on stupidity and she frequently gets herself and Louise into a lot of trouble by her inexperienced actions. ...read more.

He then robs her. This can be compared to Shirley Valentine who falls for a man named Costas who charms her with his politeness and his eagerness to keep her happy but who later uses her. This shows men from a women's perspective. They show the way that men use women for their own uses, winning them over with charm until they finally hurt them. In some ways men in both films men are presented very negatively. Yet it can be true to say that this aspect of men from a women's viewpoint is something many women can relate to. In both films the women find themselves. They are freed from the oppression of men and find the strong willed personalities that they were losing. Therefore I believe both films are successful in presenting stories from a women's viewpoint on the real life problems women face. Both films are realistic and can be compared to the lives of many women in the same situations. These films allow women to relate to the characters and experience emotions on issues that they have faced throughout history such as rape and sexism. They allow women to feel a sense of hope and to make them understand that they are individuals who must fulfil their dreams. Shirley Valentine and Thelma and Louise allow women to overcome stereotypical images of 'housewives' and 'sex objects' and present women as strong with their own individual characters. In this way both films are successful in showing the problems and issues women face and overcome from a female perspective. Sonam Raja 10:16 ...read more.