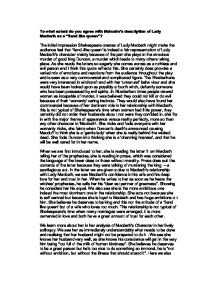 To what extent do you agree with Malcolm's description of Lady Macbeth as a &quot;fiend like queen&quot;?

To what extent do you agree with Malcolm's description of Lady Macbeth as a "fiend like queen"? The initial impression Shakespeare creates of Lady Macbeth might make the audience feel that 'fiend-like queen' is indeed a fair representation of Lady Macbeth's character mainly because of the part she plays in the atrocious murder of good king Duncan, a murder which leads to many others taking place. As she reads the letters so eagerly she comes across as a ruthless and evil person and I think this quote reflects this. She certainly does provoke a varied mix of emotions and reactions from the audience throughout the play and is seen as a very controversial and complicated figure. The Elizabethans were very interested in witchcraft and with her 'unnatural' behaviour and she would have been looked upon as possibly a fourth witch, defiantly someone who has been possessed by evil spirits. In Elizabethan times people viewed woman as incapable of murder, it was believed they could not kill or do evil because of their 'womanly' caring instincts. They would also have found her controversial because of her dominant role in her relationship with Macbeth, this is not typical of Shakespeare's time when women had little power, they certainly did not order their husbands about nor were they confided in. she fits in with the major theme of appearance versus reality perfectly, more so than any other character in 'Macbeth'. ...read more.

Instead of questioning the morality of the deed as her husband does, she questions his manliness using insults in order to convince him to do it. "when you durst it, then you were a man", she then accuses him of cowardice, questions his love for her, before questioning his sexuality and reputation. She also uses flattery to persuade him "Great Glamis! Worthy Cawdor!... all hail hereafter". Finally she reassures him it will work "But screw your courage to the sticking point, and we'll not fail". We can see by all her devious methods just how determined she is to get her way. She questions his love for her even though she knows he loves her deeply, she manipulates him knowing he cannot withstand such an emotional challenge, this shows her cruelness and her "fiend-like" qualities at this point. After the murder, when he has done what she wanted, she reassures him by calling him "My Husband" for the only time in the play. She offers him comfort, as she is very calm, the opposite of Macbeth who is extremely agitated. She is not afraid and tries to calm him by telling him "A little water clears us of this deed", later her frantic hand washing will prove this assertion wrong. We see after the murder that she has not been completely 'unsexed', she says that if Duncan had "not resembled my father as he slept, I had don't" implying that she is still very much a woman with a woman's weaknesses. ...read more.

and "What, will these hands ne'er be clean?" This act of sleepwalking is clearly Lady Macbeth paying the price for what she has done, her world has become hellish. The guilt soon becomes too much for her and she commits suicide. I think that she was trying to help Macbeth get what he wanted and she felt he deserved, I believe that if she was truly a 'fiend-like queen' then she would not have been haunted by her fears and the murders would not have effected her this way. In conclusion I believe that Malcolm's description of her as a "fiend-like queen", is not a n entirely accurate representation of Lady Macbeth, contrary to my initial impression of her. This remark may have some truth to it as Lady Macbeth did manipulate Macbeth into doing the things he did, but she does realise finally the enormity what she has done. She regrets her actions and I don't think that regret is something that a 'fiend' would feel. The witches can be seen as more responsible for Macbeth's actions as they gave him the thought of murder even though it was Lady Macbeth that spurred him on. She died what she did out of love for her husband, so I don't think she is truly evil just someone overcome by ambition for her husband, who acted without thing of the consequences. Her final remorse reveals her human side rather than her 'fiend-like' qualities. ...read more.