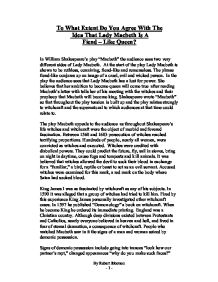 To What Extent Do You Agree With The Idea That Lady Macbeth Is A Fiend - Like Queen?

To What Extent Do You Agree With The Idea That Lady Macbeth Is A Fiend - Like Queen? In William Shakespeare's play "Macbeth" the audience sees two very different sides of Lady Macbeth. At the start of the play Lady Macbeth is shown to be ruthless, conniving, fiend-like and remorseless. The phrase fiend-like conjures up an image of a cruel, evil and wicked person. In the play the audience sees that Lady Macbeth has a l**t for power. She believes that her ambition to become queen will come true after reading Macbeth's letter with tells her of his meeting with the witches and their prophecy that Macbeth will become king. Shakespeare wrote "Macbeth" so that throughout the play tension is built up and the play relates strongly to witchcraft and the supernatural to which audiences at that time could relate to. The play Macbeth appeals to the audience as throughout Shakespeare's life witches and witchcraft were the object of morbid and fevered fascination. Between 1560 and 1603 persecution of witches reached terrifying proportions. Hundreds of people, nearly all women, were convicted as witches and executed. Witches were credited with diabolical powers. They could predict the future, fly, sail in sieves, bring on night in daytime, cause fogs and tempests and kill animals. It was believed that witches allowed the devil to suck their blood in exchange for a "familiar," a bird, reptile or beast to act as an evil servant. ...read more.

Lady Macbeth plays upon Macbeth's manliness to get him to proceed with the murder by saying "art thou afeard," and calling him a "coward." Lady Macbeth knows her husband well and knows that this will aggravate him. Many people regard Macbeth as courageous "for brave Macbeth well he deserves that name." Lady Macbeth wants to dent Macbeth's confidence so that he will commit regicide. The audience can see from her words that Lady Macbeth is fiend like. When Macbeth says "if we should fail?" Lady Macbeth reassures him by saying "but screw your courage to the sticking - place and we'll not fail." This hints that Lady Macbeth has faith that Macbeth will not fail in the assassination of Duncan. Lady Macbeth shows her fiendish side again when she smears the blood of the daggers on to the guards "give me the daggers." This was after Macbeth refused to do it "I'll go no more." This suggests to the audience that Lady Macbeth is cunning and devious by shifting the blame onto the guards "spongy officers...bear the guilt." Lady Macbeth does this to try to cover up the act of Macbeth who has just committed regicide. After the murder Lady Macbeth shows her devilish side again when she pretends to grieve, "help me hence ho." Lady Macbeth does this to avoid people being suspicious about her involvement in the murder. The audience knows this as earlier in the play Lady Macbeth says "our griefs and clamour roar upon his death?" ...read more.