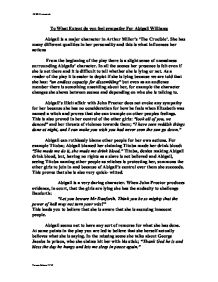 To what extent do you feel sympathy for Abigail Williams (Abigail is a major character in Arthur Miller's 'The Crucible').

To What Extent do you feel sympathy For Abigail Williams Abigail is a major character in Arthur Miller's 'The Crucible'. She has many different qualities in her personality and this is what influences her actions From the beginning of the play there is a slight sense of uneasiness surrounding Abigails' character. In all the scenes her presence is felt even if she is not there and it is difficult to tell whether she is lying or not. As a reader of the play it is easier to depict if she is lying because we are told that she has: "an endless capacity for dissembling" but even as an audience member there is something unsettling about her, for example the character changes she shows between scenes and depending on who she is talking to. Abigail's illicit affair with John Proctor does not evoke any sympathy for her because she has no consideration for how he feels when Elizabeth was named a witch and proves that she can trample on other peoples feelings. ...read more.

People are in court due to Abigail's' accusations and the longer the trails go on the harder it becomes for Abigail, and the rest of the girls to admit that they were lying. Therefore she leaves with Parris' life savings without consideration for how Parris would feel. Stopping only (In the screenplay) to try and save John from being hanged, unsuccessfully. Some time after the trials it emerges that Abigail carved herself a career as a prostitute. This is surprising because of the way Abigail was portrayed to the audience. The impression was given to believe that while she had no thought for others she respected herself more than that and was therefore unlikely to behave in such a manner. This would not evoke any sympathy towards Abigail because after all the evil things she has done to innocent people she deserves to have to resort to such desperate measures of earning money. There are some points, however that would lead you to have sympathy for Abigail. ...read more.

To some extent John Proctor has to be blamed because he is older and wiser than Abigail and must have led her, somewhat, to believe that he truly loved her and that something was going to become of his love. It can be seen that she still loves him by the way she downplays Betty's illness: "We were dancin' in the woods last night, and my uncle leaped in on us she took fright is all." Miller himself could not decide what kind of character Abigail was. 'The missing scene' proves this, which he wrote but did not include. In this scene she seems to be convinced of her ' godly work' and this is why she truly believes that John Proctor loves her and this 'love' is seen again in Miller's screenplay. In conclusion the good in her personality appears to outweigh the bad. Her behaviour towards members of her community is at times inexcusable but it is also partially understandable. Whilst she has been evil enough to have people killed, there are many reasons, which help to explain these actions and therefore cause the audience to understand why she behaves as she does. GCSE Coursework Vanessa Matson IV 45 ...read more.