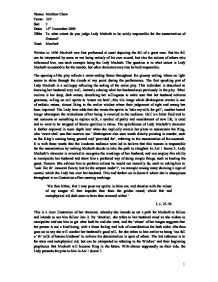 To what extent do you judge Lady Macbeth to be solely responsible for the assassination of Duncan?

Written in 1606 Macbeth was first performed at court depicting the fall of a great man. But his fall can be interpreted by some as not being entirely of his own accord, but also the actions of others who influenced him, one such example being the Lady Macbeth. The question is to what extent is Lady Macbeth accountable for the murder, but other characters may also be held responsible. The opening of the play reflects a never-ending theme throughout: the gloomy setting, where no light seems to shine through the clouds at any point during the performance. The first speaking part of Lady Macbeth is a soliloquy reflecting the setting of the entire play. This individual is described as knowing her husband very well, instantly echoing what her husband says previously in the play. What evolves is her deep, dark nature, describing her willingness to make sure that her husband achieves greatness, calling on evil spirits to 'unsex me here'; this vile image which Shakespeare creates is one of sadistic nature, almost liking to the earlier witches where their judgement of right and wrong has been impaired. The Lady later adds that she wants the spirits to 'take my milk for gall'; another horrid image whereupon the wickedness of her being is revealed to the audience. ...read more.

Furthermore, it can be said that the Lady could make have influence Macbeth to make this decision to eliminate Duncan's power, but Macbeth had an equal or larger part to play in the beginning of a tale of greed. He would have not needed a lot of drive from his wife to make his decision, as shown in Act 1 Scene 4. Here, Macbeth refers back to the theme of the whole play, asking for the light not to let people 'see black and deep desires'; he is known here that he does not need to someone else to drive him to strike Duncan, for it is what lies within him which led himself to decide he wants to get the throne by force under the new circumstances. However, not so much earlier on in the play, Macbeth is also depicted as having a clouded judgement and needing someone to help him understand, with his own conclusion coming to something where 'If chance will have me King, why chance may crown me Without my stir.' These lines tell the audience that Macbeth has no problem in becoming King if he does not need to inflict any harm upon any other body. ...read more.

Additionally, Act 2 Scene 2 is a very important scene to show the Lady's derision towards Macbeth when he hasn't performed the deed to plan. 'Go get some water' is a key line, with 'Go' being in the imperative and shows that she is very much in control and has once again made Macbeth seem mentally weak, even after performing a physically strong act. It is known that the Lady Macbeth is a very prominent character, and the level of dialogue used by Shakespeare to portray her sinister character is strewn across the late Act 1 and earlier Act 2 with various literary devices to help associate a seemingly harmless character to Duncan's eyes as the person with the most responsibility upon her shoulders. The extent is a very large one, but it is nevertheless also important to recognise the determination that Macbeth has lying not far from the surface and just a push from his wife made the assault inevitable to prove himself to his wife. ?? ?? ?? ?? Name: Matthew Chew Form: 10P Set: 2 Date: 14th November 2009 Title: To what extent do you judge Lady Macbeth to be solely responsible for the assassination of Duncan? Text: Macbeth 1 ...read more.