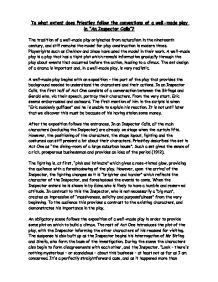 To what extent do you regard Priestley's &quot;An Inspector Calls&quot; as a well-made play?

To what extent does Priestley follow the conventions of a well-made play in "An Inspector Calls"? The tradition of a well-made play originates from naturalism in the nineteenth century, and still remains the model for play construction in modern times. Playwrights such as Chekhov and Shaw have used the model in their work. A well-made play is a play that has a tight plot which reveals information gradually through the play about events that occurred before the action, leading to a climax. The set design of a drama is important and, in a well-made play, is very realistic. A well-made play begins with an exposition - the part of the play that provides the background needed to understand the characters and their actions. In an Inspector Calls, the first half of Act One consists of a conversation between the Birlings and Gerald who, via their speech, portray their characters. From the very start, Eric seems embarrassed and awkward. The first mention of him in the scripts is when "Eric suddenly guffaws" and he is unable to explain his reaction. ...read more.

To the audience this provides a contrast to the existing characters, and demonstrates his importance in the play. An obligatory scene follows the exposition of a well-made play in order to provide some plot on which to build a climax. The rest of Act One introduces the plot of the play, with the Inspector informing the other characters of his reasons for visiting. The suspense is also built up as the Inspector begins his interrogation of Mr Birling and Sheila, who form the base of the investigation. During the scene the characters also begin to form disagreements with each other, and the Inspector. "Look - there's nothing mysterious - or scandalous - about this business - at least not as far as I am concerned. It's a perfectly straightforward case, and as it happened more than eighteen months ago - nearly two years ago - obviously is has nothing whatever to do with the wretched girl's suicide. Eh, Inspector?" The repetition of ago in the scene emphasises the length of time, and the annoyance of Mr Birling. ...read more.

The penultimate aspect of a well-made play is a mistaken-identity. To conclude the play, Priestley reveals the depths of the characters, with their reactions to the Inspector's visit. However, the final line of the play reveals the mistaken-identity. "That was the police. A girl has just died - on her way to the Infirmary - after swallowing some disinfectant. And a police inspector is on his way here - to ask some - questions - ." Birling's final line reveals that the original Inspector was not all he said he was - the penultimate aspect of a well-made play. Finally, in a well-made play, there is a denouement. The denouement is the final resolution of a dramatic plot, however in "An Inspector Calls" there is no denouement. The play finishes abruptly with a mistaken-identity, and the audience are left to ponder over the outcome of the characters. Priestley's "An Inspector Calls" follows the conventions of a well-made play to a considerable extent, but Priestley has no denouement in the play. However, I prefer the ending of "An Inspector Calls" to an alternative ending for the play as it provides an open interpretation, and keeps the suspense that has been maintained throughout the play. ...read more.