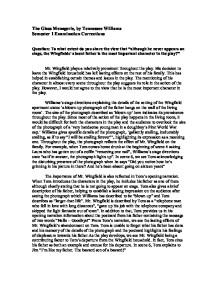 To what extent do you share the view that &quot;although he never appears on stage, the Wingfields' absent father is the most important character in the play?&quot;

The Glass Menagerie, by Tennessee Williams Semester 1 Examination Corrections Question: To what extent do you share the view that "although he never appears on stage, the Wingfields' absent father is the most important character in the play?" Mr. Wingfield plays a relatively prominent throughout the play. His decision to leave the Wingfield household has left lasting effects on the rest of his family. This has helped in establishing certain themes and issues in the play. The mentioning of his character in almost every scene throughout the play suggests its role in the action of the play. However, I would not agree to the view that he is the most important character in the play. Williams's stage directions explaining the details of the setting of the Wingfield apartment states 'a blown-up photograph of the father hangs on the wall of the living room'. The size of the photograph described as 'blown-up' here indicates its prominence throughout the play. ...read more.

In addition to that, Tom provides us in his opening narration information about the postcard from his father containing the message of two words "Hello - Goodbye!" From Tom's narration, we see the lasting effects of Mr. Wingfield's abandonment on Tom. Tom is unable to forget what his father has done and his memory of the details of the photograph and the postcard highlights his feelings of displeasure towards his father.As the play develops, we see Mr. Wingfield being a contributing factor to Tom's departure from the Wingfield household. In fact, Tom cites his father as both an example and excuse for his departure. In scene 6, Tom explains to Jim "I'm like my father. The b*****d son of a b*****d!" As mentioned earlier, Mr. Wingfield's departure has left an impact on every family member and Amanda is still suffering from the results of his irresponsibility. His departure has left Amanda with the burden of raising Tom and Laura as a single parent. ...read more.

Laura is extremely reliant on the vitrola to provide her the comfort and assurance she needs to cope with the real world. This is evident in scene 2 when she moves towards the vitrola while Amanda is confronting her about her experience in the Business School and in scene 6 where we see Laura hurries to the living room and pauses at the vitrola after she opens the door for Jim and Tom. We see here that the items that Mr. Wingfield has left behind, the vitrola and the records remind both the audience and the characters in the play of his existence. Based on the impact Mr. Wingfield has on the Tom, Amanda and Tom, we can deduce that he plays an important role in the play. However, to say that he is the most important character in the play would be too extreme. His character, unlike the rest that appears on stage, is only presented and developed by the lines of Tom and Amanda. The presentation of his character is fairly limited since he does not take part directly in the play and only influences the characters in the play. ...read more.