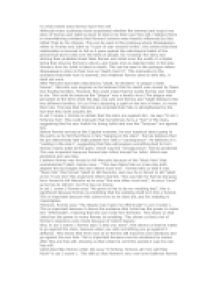 To what extent does Romeo have free will?

To what extent does Romeo have free will Although many audiences have questioned whether the doomed and tragic love story of Romeo and Juliet is down to fate or by their own free will, I believe there is overwhelming evidence that Romeo's actions were heavily influenced by fate rather than by his choices. This can be seen in the prologue where Shakespeare refers to Romeo and Juliet as "A pair of star crossed lovers", this shows that their relationship is doomed to fail as it goes against the astrological belief of the period that stars ruled over the fates of people. By 'crossing' the stars and defying their predetermined fates Romeo and Juliet incur the wrath of a higher being that ensures Romeo's unlucky and tragic end as depicted later in the play. Romeo's love for Juliet is fated to death. ...read more.

Before Romeo arrived at the Capulet mansion, he was sceptical about going to the party as he felt that there is fate "hanging in the stars". Romeo believes that his pre determined fate shall present him with a "consequence". He believes it is "waiting in the stars", suggesting that fate will prepare something bad for him. Romeo meets Juliet at the party, which was the "consequence", Romeo predicted. This was important because Romeo later killed himself for Juliet. Which was predicted and was fate. I believe Romeo was forced to kill Mercutio because of the "black fate" that overwhelmed Tybalt. Romeo says - "This days black fate on moes day doth depend this but begins the woe others must end". Romeo tells us that it was "black fate" that forced Tybalt to kill Mercutio, and now he is forced to kill Tybalt as he "must end" this argument others started. ...read more.

Also, in act 5 scene 1 Romeo says "I defy you stars", this shows us that he wants to go against the stars, because when you defy something you go against it - defiance. This shows that from now on in Romeo will make his own decisions and go against his own fate. This is important because now his decisions he makes after this are free will, showing us that when he commits suicide it was his own free will. Juliet describes Romeo when she says "O fortune, fortune, all men call thee fickle" in act 5 scene 1. This tells us that Romeo's very own lover believes Romeo rushes into decisions. She describes him as "fickle", is someone is "fickle" it means that they rush into decisions. She calls upon fate (fortune) to make Romeo less fickle, as his decisions cause them pain, such as when he rushed into killing Tybalt. This is a brilliant example of Romeo's downfall, because it shows that he rushed into decisions. ...read more.