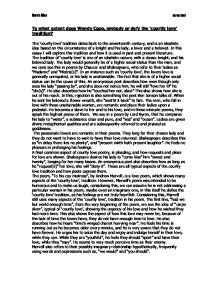 To what extent does Wendy Cope, embody or defy the 'courtly love' tradition?

To what extent does Wendy Cope, embody or defy the 'courtly love' tradition? The 'courtly love' tradition dates back to the seventeenth century, and is an idealistic idea based on the circumstance of a knight and his lady, a lover and a beloved. In this essay I will explore this tradition and how it is used in past and present literature. The tradition of 'courtly love' is one of an idealistic nature, with a classic knight, and his beloved lady. The lady would generally be of a higher social status than the man, and we cans see this in poems by Chaucer and Shakespeare, who refer to their ladies as "Madame" and "Mistris[s]". In an instance such as 'courtly love', the lovers love is generally unrequited, or his lady is unattainable. The fact that she is of a higher social status can be the cause of this. An anonymous poet describes how even though only sees his lady "passing by", and she does not notice him, he will still "love her til" he "die[s]". He also describes how he "touched her not, alas!" This also shows how she is out of his reach. In this, rejection is also something the poet Ben Jonson talks of. When he sent his beloved a flower wreath, she "sent'st it back" to him. The men, who fall in love with these unattainable women, are romantic and place their ladies upon a pedestal. ...read more.

He we see how he has used the number of years it would take to describe her beauty and charms, to flatterer her. We can also notice how he considers her of a higher social status than himself, when he says "lady you deserve this state". We are aware of his perception of his stateliness, because she is beautiful and, typically in these circumstances, of a higher social status, he considers his self quite below her. The poem, "Message", is a much more modern poem, written by a woman called Wendy Cope. This poem is about a woman, who is waiting for a phone call, from a man. Despite the fact that this is a modern poem, it still vaguely adopts and defies some aspects of the 'courtly love', tradition. It is clear that she embodies the idea of "carpe diem" from the tradition. She urges her lover to "pick up the phone", before it is "too late". She feels there is "no time to spare". We can see how she desires love now and at the moment. However, the 'courtly love' tradition very much shows the lover waiting almost forever for their beloved to reciprocate their feelings, and although does so at great suffering and despair, "Message", states that her "love will turn to hate", and that she may begin to "look elsewhere". ...read more.

"Message", states that if he does not "pick up the phone" her love will "turn to hate". Here we see she is not prepared to hold on forever, but in "Manifesto", we see she is willing to write "another book" before she gives up on him. In both poems we can also see that quite a realistic and practical idea of love is portrayed through Wendy Cope's poems. Although in both cases, she does not attempt to deny that she is in some sort of "state", in "Manifesto" she describes herself as being "pierced by a rusty allegoric dart", almost describing her feelings as mythical and not real. The fact she describes the "dart" as rusty shows her ideas of love and that she is aware it is an age-old condition to be in. The fact she says she is "pierced" by the dart, also tells us that she has been caught by something she may not have necessarily wanted, and something she can not easily get rid of. In conclusion, we can see that the tradition of 'courtly love' is present in many love poems, and even in modern day poetry. Wendy Cope uses many ideas based on the 'courtly love' idea, but also defies some of the traditions. The aspects can be made use of and exploited in order to establish the feelings of lovers in different circumstances. Sarah Allen 08/05/2007 ...read more.