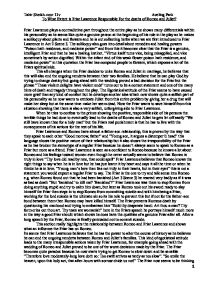 To What Extent is Friar Lawrence Responsible For the deaths of Romeo and Juliet?

To What Extent is Friar Lawrence Responsible For the deaths of Romeo and Juliet? Friar Lawrence plays a contradictive part throughout the entire play as he shows many differentials within his personality as he seems like quite a genuine person at the beginning of his role in the play as he makes a soliloquy about plants and flowers and he is out collecting herbs when we are first introduced to Friar Lawrence in Act 2 Scene 3. The soliloquy also goes into detail about remedies and healing powers "Poison hath residence, and medicine power" and from this it becomes clear that the Friar is a genuine, intelligent Friar and that he has a healing instinct. "Virtue itself turns vice, being misapplied, and vice sometime's by action dignified. Within the infant rind of this weak flower poison hath residence, and medicine power" in this quotation the Friar has compared people to flowers, which exposes a lot of the Friars spiritual side. This all changes when the Friar decides to unite Romeo and Juliet in marriage, he believes that this will also end the ongoing vendetta between their two families. He believe that he can play God by trying to change destiny but going ahead with the wedding proved a bad decision for the Friar but the phrase "These violent delights have violent ends" turns out to be a correct statement and one of the many hints of death and tragedy throughout the play. The Egotistical attitude of the Friar seems to have caused more grief than any kind of comfort but he develops another idea which now shows quite a selfish part of his personality as he now wants to extricate Juliet from this entire problem by giving her a drug that will make her sleep but at the same time make her seem dead. Now the Friar wants to save himself from this situation showing that there is also a very selfish, unforgiving side to Friar Lawrence. ...read more.

This phrase used by Friar Lawrence is proof of the Friar's primary motive although he had other motives such as simply trying to help his friend and preserve the marriage to keep Romeo and Juliet happy but another reason why the Friar arranged the marriage ceremony and 'tried' to do the right thing could have been to boost his status, he wanted to portray himself in a favourable light which is another example of the Friars multiple personalities. Friar Lawrence is supposed to be an honourable, trustworthy figure of great importance but he seems to have his priorities mixed up as there are times when he seems to care a lot more about himself than he does either Romeo or Juliet. Him going ahead with the wedding ceremony shows that the Friar is trying to change the course of history, as he believes that he can unite the two families through the marriage of Romeo and Juliet, this shows that the Friar wants to be omnipotent as if he were God and this sometimes prevented the Friar from behaving the way he should have done within a such a situation. The Friar was seen as a confidant to Romeo because he would be there, as a friend and almost a fatherly figure to him and Friar Lawrence would help Romeo in his time of need. Friar Lawrence may have taken such actions towards keeping Romeo and Juliet together for many reasons but this could be more evidence of the Friars split personality because he could have arranged the marriage in an attempt to bring the Capulet and Montague families together so that he would be the hero and have a higher sense of superiority, or he could have simply just wanted Romeo and Juliet to live happily ever after and genuinely just want to unite the two families and end the ongoing dispute. I believe that the Friar gave Juliet that sleeping potion in an attempt to extricate himself from the situation showing how selfish he can be. ...read more.

For shame! Confusion's cure lives not in these confusions". He is abusing his position as a Friar because of the way he lies and comes up with unstable ideas that lead to the deaths of Romeo and Juliet. This is legitimate proof that the friar is the main culprit to blame for the deaths of Romeo and Juliet, but he was not the only culprit, the nurse deserted Juliet along with her parents therefore making Juliet's life seem increasingly worthless as she no longer had that good friend that she could confide in whenever she needed help and her parent would disown her and make her live on the street just because she loved Romeo and not Paris. The Friar was there to cause Romeo and Juliet the least amount of grief possible but in the end he ended up causing as much grief possible. The Friar did achieve his ultimate goal of uniting the two families that had been enemies for many years but at the expense of Romeo and Juliet themselves, which is not what he, had intended. When Friar Lawrence decided to confess his actions to the prince he showed true qualities of a Friar as he held nothing back and told everything he had done to lead to such a to such a tragedy, and he even admitted that he needed to be punished "Miscarried by my fault, let my old life be sacrific'd, some hour before his time, unto the rigour of severest law."(Act 5 Scene 3). The friar seemed to get let off easily as he is pardoned by the Prince in a very forgiving manner "We still have known thee for a holy man" of course this is not the case as the friars real punishment is the fact that he has to live with the consequences of what he has done for the rest of his life. You cheater. Don't copy it all . By tahir sheikh-noor 11v Tahir Sheikh-noor 11v Aveling Park 1 ...read more.