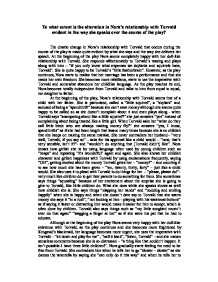 To what extent is the alteration in Nora's relationship with Torvald evident in the way she speaks over the course of the play?

She says things "clapping her hands" and "nodding and smiling happily" when she is happy and when she doesn't dare say to Torvald that she wants money she says it "in a rush", "not looking at him - playing with his waistcoat buttons" as if saying it faster or distracting him would make it easier for him to accept, which is often done by children. Torvald also says things such as "my little songbird mustn't ever do that again" "wagging a finger at her" as if she were his pet that he had to educate. Although at the beginning of the play Nora seems very happy with her doll-like existence with Torvald, as the play continues and she becomes more frightened by Krogstad's blackmail, her language becomes more urgent, she uses the imperative with Torvald - "sit down and play for me" , "call it back", "listen, Torvald" - and she makes senseless comments because she is so distressed - "a thing like that couldn't happen. It isn't possible-I have three little children!". ...read more.

She says things clearly to him - "you don't understand me. And I've never understood you" - and realising it is "the first time that ...man and wife have had a serious talk together". She confronts him with the truth, that she has "been performing tricks" for him and that "it's no good your forbidding me anything any longer" because she has freed herself. By the end of the play Nora has her own voice, not Torvald's, she is no longer his doll that will do whatever he asks to please him, no longer his "little skylark" and "not the wife for you". Over the course of the play, the alteration in Nora's relationship with Torvald is made evident by the change in the way she speaks. At the beginning, she is his "little squirrel", a childish "featherbrain" that is pampered and patronised by Torvald. The various turning points in the action, where Nora starts to change the way she speaks, using the imperative and contradicting Torvald start to show the change in the relationship that is completed by the end of the play, when Nora talks clearly to Torvald from equal to equal, having a voice of her own, no longer his doll. ...read more.