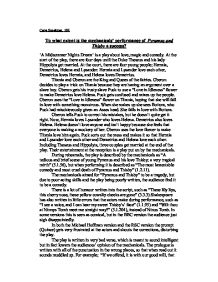 To what extent is the mechanicals&amp;#146; performance of Pyramus and Thisby a success?

Cerys Speakman, 10K To what extent is the mechanicals' performance of Pyramus and Thisby a success? 'A Midsummer Nights Dream' is a play about love, magic and comedy. At the start of the play, there are four days until the Duke Theseus and his lady Hippolyta get married. At the court, there are four young people; Hermia, Demetrius, Helena and Lysander. Hermia and Lysander love each other, Demetrius loves Hermia, and Helena loves Demetrius. Titania and Oberon are the King and Queen of the fairies. Oberon decides to play a trick on Titania because they are having an argument over a slave boy. Oberon gets his trusty slave Puck to use a "Love in Idleness" flower to make Demetrius love Helena. Puck gets confused and mixes up the people. Oberon uses the "Love in Idleness" flower on Titania, hoping that she will fall in love with something monstrous. When she wakes up she sees Bottom, who Puck had mischievously given an a***s head. She falls in love with Bottom. Oberon tells Puck to correct his mistakes, but he doesn't quite get it right. Now, Hermia loves Lysander who loves Helena. Demetrius also loves Helena. Helena doesn't love anyone and isn't happy because she feels that everyone is making a mockery of her. Oberon uses the love flower to make Titania love him again. ...read more.

The BBC version was very monotonous and the acting was very serious. In the Michael Hoffman version before the play starts Wall tries to run away backstage but the others pull him back. The casts' costumes are ridiculous and exaggerated. Pyramus inappropriately wears Armour. Thisby (played by Snout, a young man) wears a dress, a lot of make up and extraordinarily long pigtails. Lion has the best costume and is very realistic. In all of the versions the lion seems to be an audience favourite as he tries his best to be intimidating yet still fails. He comes across as a real gentleman when he tells the ladies not to be afraid of him; "You ladies, you whose gentle heart do fear the smallest monstrous mouse that creeps on floor...then know that I, as Snug the Joiner, am a lion fell" (5.1.221) In the Michael Hoffman version the lion is wheeled on in a cart, for no apparent reason, but it still adds humour. In all of the versions, Moonshine isn't a very strong character. In the RSC version, Moonshine wears pyjamas and his dog is a fake dog on wheels. This Moonshine is the only Moonshine that actually tries really hard, but the smarmy Duke Theseus keeps interrupting him so he gives up. In the Michael Hoffman version Moonshine has a cigarette in his mouth and he looks like he doesn't really want to be there. ...read more.

He thinks he manages to succeed in doing this unnoticeably but the audience spots him. The audience seems to be very moved at Pyramus finding the bloodstained mantle and they stop laughing and take it seriously. Pyramus suddenly jumps up and shouts, breaking the silence and scaring the audience. He draws his sword, and screams idiotically when dying. The audience seems to cringe at his atrocious acting skills, they are quiet and are partly moved by Pyramus' death. Then Pyramus jumps up and continues to die. He scared the audience again. When Thisby find Pyramus dead, she comically bangs on his enormous breastplate. She unrealistically cuts her wrists and head off when saying "Adieu, Adieu, Adieu". Despite the comedy, the audience is very moved by this version, and the mechanicals get a good reception. I think that some parts in both versions succeed as a tragedy, such as Pyramus' death in the RSC version, and the audiences' reaction to Thisby in the Michael Hoffman version. To conclude, 'The Tragedy of Pyramus and Thisby' did not succeed as a tragedy because it was poorly written and poorly acted. It did, however, work brilliantly as a comedy, even if the mechanicals did not mean it to be. If it had been successful as a tragedy, it would not have been such a success, because people want to be happy on their wedding day. Pyramus and Thisby- a successful disaster. ...read more.