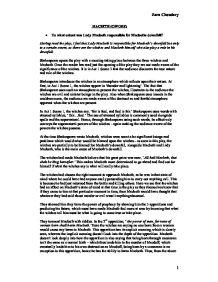 To what extent was Lady Macbeth responsible for Macbeths downfall?

MACBETH (C/WORK) * To what extent was Lady Macbeth responsible for Macbeths downfall? Having read the play, I feel that Lady Macbeth is responsible for Macbeth's downfall but only to a certain extent, as there are the witches and Macbeth himself who also play a role in his downfall. Shakespeare opens the play with a meeting taking place between the three witches and Macbeth. Once the reader has read just the opening of the play they are not made aware of the significance of the witches. It is in Act 1 Scene 3 that the audience discovers the true nature and role of the witches. Shakespeare introduces the witches in an atmosphere which reflects upon their nature. At first, in Act 1 Scene 1, the witches appear in 'thunder and lightening'. The fact that Shakespeare uses such an atmosphere to present the witches, illustrates to the audience the witches are evil and sinister beings in the play. Also when Shakespeare uses insects in the cauldron scene, the audience are made aware of the destructive and fearful atmosphere apparent when the witches are present. In Act 1 Scene 1, the witches say, 'fair is foul, and foul is fair.' Shakespeare uses words with stressed syllables, ' fair...foul.' The use of stressed syllables is commonly used alongside spells and the supernatural. Hence, through Shakespeare using such words, he effectively conveys the supernatural powers of the witches - again making the audience aware of the powers the witches possess. At the time Shakespeare wrote Macbeth, witches were seen to be significant beings and problems which would arise would be blamed upon the witches - as seen in this play, the witches are partially to be blamed for Macbeth's downfall, alongside Macbeth and Lady Macbeth, who is the main cause of Macbeth's downfall. The witches had made Macbeth believe that his great prize was near, ' All hail Macbeth, that shalt be king hereafter.' ...read more.

Macbeth hesitates at the idea of murdering Duncan whereas Lady Macbeth seems to diminish Macbeth's weak character through mocking him- 'wouldst thou have that...in thine own esteem,' Act 1,Scene 7, lines 41-43. Lady Macbeth is able to bend Macbeth to her will very easily. The audience again see Lady Macbeth's manner of putting Macbeth under her control as she says the crown is the 'ornament of life' and not striving to seek it would be an act of a coward. Due to Macbeth being in an unstable state when Lady Macbeth says this, he is again taken under her rule. Lady Macbeth says: '... and dashed the brains out.', (Act 1, scene 7) meaning she would sacrifice her own child, rather than letting such an opportunity of becoming king be pushed aside. Here Shakespeare has used a powerful image to make the audience aware of Lady Macbeth's cold ambition and the extent she would go to, in order for her to satisfy her desires. This statement said by Lady Macbeth also makes Macbeth see murdering Duncan as being a minute act and not that, which is of great wickedness, thus making Macbeth feel inclined to carry out the murder. Lady Macbeth has answers to all aspects of killing Duncan. She re-assures Macbeth that he won't be caught as being the one behind the murder as Lady Macbeth has planned to blame Duncan's 'spongy officers who shall bear the guilt of [their] great quell.' Here we again come to see how Macbeth, being a vulnerable man, sees this as a great idea and applauds his wife's suggestion - which alone supports the fact that Lady Macbeth is the one leading to Macbeth's downfall. If Lady Macbeth had not come up with such an idea then Macbeth would perhaps have been even more reluctant to carry out the murder due to fear of being found out. ...read more.

She feels that the only way through which she will obtain her ambitions is to be sinister and evil. Due to Lady Macbeth being unable to take authority in order to gain a high status, she uses her husband as a vehicle to fulfil her ambitions. I believe Lady Macbeth is the main cause of Macbeth's downfall. She is the main one to be blamed for why Macbeth's ambitions lead to his downfall. Although the witches were involved, it is Lady Macbeth who constantly urges Macbeth to gain that which she requires. Although Macbeth is also to be blamed, for his own downfall, I do not see him as the main cause. He did feel guilty within, yet as his wife would mock his manliness he felt the need to defend his dignity as at that time, questioning a mans masculinity was seen as being a disgrace to the man as they were meant to be fierce warriors and men of great might. Lady Macbeth is to be blamed the most as we see when she dies, Macbeth says: ' ..[life] is a tale Told by an idiot, full of sound and fury, Signifying nothing.' Act 5,Scene 5 The above suggests Macbeth's motivation and power has vanished, due to Macbeth no longer being manipulated by Lady Macbeth. It suggests Macbeth no longer sees the significance of holding the title of a 'king'. He doesn't seem to comprehend why he even desired to have such a title. After the death of Lady Macbeth, Macbeth realises his own death is near: 'And all our yesterdays have lighted fools The way to dusty death.' Act 5, Scene 5 The above spoken by Macbeth suggests he feels he can no longer return to the happy moments he had undergone before he was poisoned by ruthlessness and ambition by his wife. Having taken into consideration the roles of the witches, Macbeth and Lady Macbeth, I am convinced Lady Macbeth is the main driving force behind Macbeth's downfall. Zara Choudary 1 ...read more.