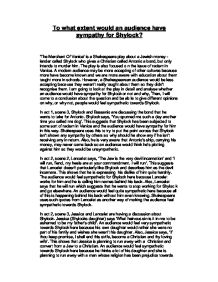 To what extent would an audience have sympathy for Shylock?

To what extent would an audience have sympathy for Shylock? 'The Merchant Of Venice' is a Shakespeare play about a Jewish money-lender called Shylock who gives a Christian called Antonio a bond, but only intends to murder him. The play is also focused on the issue of r****m in Venice. A modern audience may be more accepting of other cultures because more have become known and we are more aware with education about them taught more in schools. However, a Shakespearean audience would be less accepting because they weren't really taught about them so they didn't recognise them. I am going to look at the play in detail and analyse whether an audience would have sympathy for Shylock or not and why, Then, I will come to a conclusion about the question and be able to give different opinions on why, or why not, people would feel sympathetic towards Shylock. In act 1, scene 3, Shylock and Bassanio are discussing the bond that he wants to take for Antonio. Shylock says, 'You spurned me such a day another time you called me dog'. This suggests that Shylock has been subjected to some sort of r****m in Venice and the audience would have sympathy for him in this way. ...read more.

He is talking about the news that one of Antonio's ships has sunk. This phrase would make an audience feel unsympathetic towards Shylock because he wants to hurt, and possibly kill, Antonio. At the start of the play, he told Antonio that he would take a pound of flesh as a joke, but in this scene, he is very serious and seems very murderous. Also, in this scene, Tubal says, 'One of them showed me a ring that he had of your daughter for a monkey'. Here, he is describing Lorenzo, who has run away with Jessica and sold the ring she had for a monkey. The audience would feel sympathetic for Shylock here because the man who has run away with Jessica has sold her ring for a monkey. This gives the audience the impression that maybe Lorenzo has only run away with Jessica out of spite towards Shylock or to gain money from her. Shakespeare possibly uses these quotes to express Shylocks sudden hatred for his own daughter and why an audience would feel sympathetic for him because his own daughter has betrayed him. In act 3, scene 2, towards the end, Bassanio reads a letter from Antonio. He reads, 'my creditors grow cruel' and 'but see you at my death'. ...read more.

A Shakespearean audience would've felt that Shylock was going to win the court battle. He used the outcome to give a surprising element on the audience and make them want to read more about what will happen to him next. Also, to make the audience happy that the villain (Shylock), didn't win and got his comeuppance. In my essay, I have summarised the key points regarding why or why not an audience would feel sympathetic towards Shylock. Many different people would have different opinions on whether they would agree or disagree with Shylocks views. In my opinion, I think that what Shylock was doing was wrong but his reasons for wanting to get revenge were, to a certain degree, justified. He was merely giving Antonio a taste of what it felt to be the subject of hatred and misery. However, the way that he channelled all this hatred for the Christians onto one man was wrong and he shouldn't have done it. There were other ways he could've sought justice, but not in the way he planned to. In conclusion, I feel that I have concluded the main areas of the play that were crucial to this essay and drawn up a good conclusion about whether and audience may or may not feel sympathetic for Shylock and why they would feel like this. ?? ?? ?? ?? ...read more.