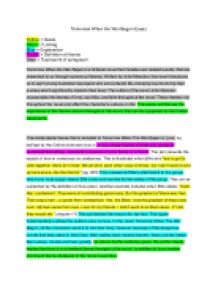 Tomorrow When the War Began is a fictional novel that includes war related events, that are presented to us through numerous themes,

Ã¯Â»Â¿Tomorrow When the War Began Essay Yellow = Quote Green = Linking Blue = Explanation Purple = Definition of theme Gray = Topic/point of paragraph Tomorrow When the War Began is a fictional novel that includes war related events, that are presented to us through numerous themes, Written by John Marsden, this novel introduces us to eight young Australian teenagers who encountered life-changing events during their journey which significantly impacts their lives. The author of the novel John Marsden incorporates the themes of love, sacrifice, and faith throughout the novel. These themes run throughout the novel and affect the character's outlook on life. This essay will discuss the importance of the themes shown throughout the novel, this can be supported by the further paragraphs. One indisputable theme that is included in Tomorrow When The War Began is Love. As defined by the Oxford dictionary love is â€˜a very strong feeling of liking and caring for somebody/something, especially a member of your family or a friendâ€™. ...read more.

Sacrifice is portrayed as a major theme throughout the novel. As specified by the Oxford Dictionary sacrifice is â€˜the fact of giving up something important or valuable to you in order to get or do something that seems more important;â€™ This is apparent when Ellie declared â€œI felt guilty even thinking about love while our world was in such chaos, and especially when my parents were going through this terrible thingâ€ (pg. 178). This suggests Ellie is experiencing relatively normal feelings for a teenager, but as a result of the situation she had to give up the right to feel such emotions and focus on surviving. Therefore, Ellie and her friends are sacrificing their â€œnormal-teenage experiencesâ€ because of the invasion. Alternatively, one could argue the aspect of sacrifice using a different quote. Ellie stated "I had blood on my hands, like the Hermit, and just as I couldn't tell whether his actions were good or bad, so too I couldn't tell what mine were. ...read more.

If I have to do it, I hope I'll have the strength, like Ellie did." (175) in the situation displayed one could illustrate that Homer had faith within himself that when the time came, he could protect his friends. As emphasised by the evidence given, the author conveys the aspect of not only love and sacrifice but also faith being a significant theme demonstrated throughout said novel. Tomorrow When The War Began is a novel that explores the harsh reality of life for teenagers in a war environment coupled with the challenges, they must face in order to survive. The eight Charactersâ€™ strength of Faith combined with their love ensured their survival in a difficult and challenging world. This novel furthermore explores how sacrifice impacts their Identity, morals, values, and plan of survival. In the conclusion of the novel the characters rise up and lead each other to safety, which leaves the reader with a sense of gratitude about their childhood and future. ...read more.