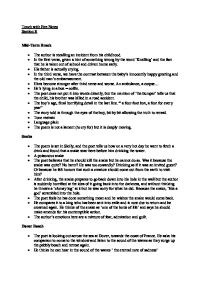 Touch with Fire Notes Section E Mid-Term Break * The author is recalling an incident from his childhood. * In the first verse, given a hint of something wrong by the word 'Knelling' and the fact that he is taken out of school and driven home early. * His father is actually crying. * In the third verse, we have the contrast between the baby's innocently happy greeting and the old man's embarrassment. * Hints become stronger after third verse and worse. An ambulance, a corpse... * He's lying in a box = coffin. * The poet does not put it into words directly, but the mention of 'the bumper' tells us that the child, his brother was killed in a road accident. * The boy's age, final horrifying detail in the last line. " a four-foot box, a foot for every year" * The story told is through the eyes of the boy, bit by bit allowing the truth to reveal. * Tone restrain * Language plain * The poem is not a lament (to cry for) but it is deeply moving. Snake * The poem is set in Sicily, and the poet tells us how on a very hot day he went to fetch a drink and found that a snake was there before him drinking the water. ...read more.

* He pleads for strength to resist those who would take away his individual humanity and reduce him to an unthinking part of a machine with no will of his own so that he has no personality left. If this cannot be prevented, he says, it would be better not to be born. * The poet wrote this during the rise of Hitler in 1930's. This was a subject of great concern to the intellectual young people of the time. * The verses begin simply and then build up to evermore elaborate lists of things, until the contrast of the final stark statement in the last line. Poem in October * The poet wrote this poem when he was 30 years old and he re-visited the seaside town in Wales where he lived as a boy * Everything seemed to call him to set out, while the rest of the town was still asleep, and walk around the places he used to know as a child. * The autumn was changeable, with showers of rain, and intervals of sunshine when the birds sang. * The poet climbed the hill and looked down on the church which looked small, like a snail with its horns out. ...read more.

* The only time he has any nourishing food is at Harvest Festival in the autumn when Fruit, vegetables, wheat and bread are brought to the church for a service of thanksgiving. * But he is annoyed to find that other mice who don't live in the church come in at this time to enjoy the good; they 'have no proper business here'; two mice who live in the fields come in, and also a rat, they have no interest in religion and they come for what they can get. Even 'prosperous' mice come, pretending to hear the organ play but actually to eat the oats placed on the altar, and a mouse who disapproves of the services held in this church doesn't mind coming in to eat the food. * The church mouse thinks it very unfair that he who starves in the church all the year should have to share the food with these intruders. * From line 51 onwards the poet writes sarcastically as the mouse says that human brings don't behave like that, but actually they do. They come to church regularly and are truly religious, but it is very strange how many people appear at Harvest Festival who don't come to church at other times. * This poem gets its message across by making us smile. ...read more.