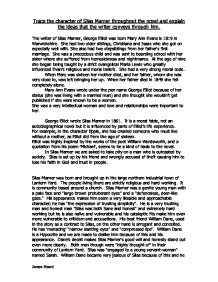 Trace the character of Silas Marner throughout the novel and explain the ideas that the writer conveys through him.

Trace the character of Silas Marner throughout the novel and explain the ideas that the writer conveys through him. The writer of Silas Marner, George Elliot was born Mary Ann Evans is 1819 in Warwickshire. She had two older siblings, Christiana and Isaac who she got on especially well with. She also had two stepsiblings from her father's first marriage. She was a precocious child and was sent to boarding school with her sister where she suffered from homesickness and nightmares. At the age of nine she began being taught by a strict evangelical Maria Lewis who greatly influenced Evan's religious and moral beliefs. She had a very strong moral code. When Mary was sixteen her mother died, and her father, whom she was very close to, was left bringing her up. When her father died in 1849 she felt completely alone. Mary Ann Evans wrote under the pen name George Elliot because of her status (she was living with a married man) and she thought she wouldn't get published if she were known to be a women. She was a very intellectual woman and love and relationships were important to her. George Elliot wrote Silas Marner in 1861. It is a moral fable, not an autobiographical novel but it is influenced by parts of Elliot's life experience. For example, in the character Eppie, she has created someone who must live without a mother, as Elliot did from the age of sixteen. Elliot was highly inspired by the works of the poet William Wordsworth, and a quotation from his poem 'Michael', seems to be a kind of basis to the novel. In Silas Marner we are asked to take pity on a man who is outcasted by society. Silas is set up by his friend and wrongly accused of theft causing him to lose his faith in God and trust in people. Silas Marner was born and brought up in the large northern industrial town of Lantern Yard. ...read more.

When he arrives in there, all the men are shocked to see "the pale, thin figure of Silas Marner." They have never seen this man properly, especially not in their pub asking for their help. Silas immediately accuses the local poacher, Jem Rodney who is outraged at the accusation. We do see that the villagers want to help him as they feel sorry for him and are convinced by his distress; this is another aspect of country life that is different to city life, the villagers are all very close to each other and want to help their fellow villagers. At the end of this chapter we have seen another huge contrast in the story. Dunstan is once again used as a foil to Silas. We see how Silas is good as Dunstan is bad. Silas' only concern is that he gets him money back. He does not want to hurt or punish anyone. Dunstan however seem to enjoy the idea of stealing and making the Silas un-happy. We see that Silas is a very good man and we also see that he has regained a little of his faith in people as he rushes straight to the pub for help. While Godfrey and as the other villagers (bar Silas) are at the New years party at the Red House, Godfrey's secret wife is struggling through the snow, making her way to the party to show everyone the truth about Godfrey Cass. "This journey on New Year's Eve was a premeditated act of vengeance which she had kept in her heart ever since Godfrey, in a fit of passion, had told her he would sooner die than acknowledge her as his wife." Under one arm she has their child wrapped in a blanket and in the other hand she is clutching her bottle of opium which she is drinking every ten seconds. She is tripping and stumbling through the thick, icy snow. ...read more.

He loses his religion, his faith in his fellow human beings and his beloved fianc�e. The only way Silas knows how to deal with this pain is to shut himself of from all contact with people and God, the very people who he cares about more than anything have turned against him. Despite his antisocial behaviour Silas is at heart a deeply kind and honest person as we see throughout the story. At no point in the story does he do or say anything remotely malicious and, strangely for a miser, he is not selfish. Silas's love of money is the product of his desolation, and his hidden capacity for love and happiness manifests itself when he takes in and raises Eppie. Some of Elliot's other ideas include points about the class system at the time. It is often pointed out that the richer higher class gentry are not the only good men. Often the lower class people are more honest and less selfish. Another key point is about the important things in life; love and happiness, especially the love of a child. Money is not important or doesn't provide love or happiness to a person. In the case of Silas, he began to love his money because they were the only things in his life but the didn't love him back. With Eppie, it was a two way thing, Silas loved her and she loved him back, making that both happier. The money did not give Silas anything back for all the time he spent idolising them. The love of others is ultimately more fulfilling than the love of money. Making the right (moral) choices is life is extremely important. Sometimes you have to put others first and not think about yourself as many of the characters in the story did. The results of being kind to people and respecting them can be very rewarding and Silas Marner is the perfect example of how love can change a person. A* marked ?? ?? ?? ?? James Heard ...read more.