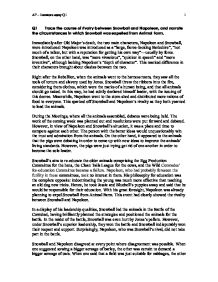 Trace the course of rivalry between Snowball and Napoleon, and narrate the circumstances in which Snowball was expelled from Animal Farm.

Q1 Trace the course of rivalry between Snowball and Napoleon, and narrate the circumstances in which Snowball was expelled from Animal Farm. Immediately after Old Major's death, the two main characters, Napoleon and Snowball, were introduced: Napoleon was introduced as a "large, fierce-looking Berkshire", "not much of a talker, but with a reputation for getting his own way"-usually by force. Snowball, on the other hand, was "more vivacious", "quicker in speech" and "more inventive", although lacking Napoleon's "depth of character". This marked difference in their characters brought about clashes between the two. Right after the Rebellion, when the animals went to the harness room, they saw all the tools of torture and slavery used by Jones. Snowball threw the ribbons into the fire, considering them clothes, which were the marks of a human being, and that all animals should go naked. In this way, he had subtly declared himself leader, with the issuing of this decree. Meanwhile, Napoleon went to the store-shed and distributed more rations of food to everyone. This sparked off Snowball and Napoleon's rivalry as they both yearned to lead the animals. During the Meetings, where all the animals assembled, debates were being held. The work of the coming week was planned out and resolutions were put forward and debated. ...read more.

Snowball, however, suggested that they send out more pigeons to stir up rebellion among the animals on the other farms. By doing this, they need not defend themselves anymore if rebellions happened everywhere. Although Napoleon was not an eloquent speaker, he was better at canvassing support for himself. One such example was shown when the sheep were especially taken to bleat into the maxim "Four legs good, two legs bad" at crucial moments in Snowball's speeches. This was part of Napoleon's plan to sabotage Snowball, a superb talker who convinces easily with his vivaciousness and beauty of language. Napoleon could not bear the thought of Snowball outshining him and outdoing his own attempts at upholding his image as a leader. The climax of their rivalry was Snowball's plan, which was to build the windmill at the knoll. It could provide electricity for the farm, light for the stalls and warmth for the animals in winter. The windmill could also run circular saws, chaff-cutters, turnip-slicers and threshing machines. With these machines doing the job for them, the animals could improve themselves with reading and conversation. Best of all, the animals only had to work three days in a week. Although "Napoleon and the full manger" plan could help the animals get more food, so that they would not starve to death, Snowball's plan seemed to be more favourable. ...read more.

He himself hardly said a word. As far as he was concerned, actions speak louder than words. This proves true when, in one moment of astonishing swiftness, daring and confidence, he calls for the dogs. Besides that, Napoleon is also totally ruthless in the way he maintains his power. He does not reveal the slightest interest in the feelings or opinions of others. As for Snowball, he was too impulsive. As brilliant as his speech was, Snowball did not have a rein on his imagination. This impetuousness blinded him to the dangerous albeit quiet schemes of Napoleon. He had not thought deep enough about the consequences of his own actions, which eventually led to his unceremonious and ignominious expulsion. Ironically, Napoleon and Snowball's rivalry did not end with Snowball's disappearance. If anything, it accentuated Napoleon's paranoia and animosity against Snowball. Afraid of his nemesis returning, Napoleon resorted to all ways and means conceivable to condemn Snowball. Examples include brainwashing the animals that Snowball was a traitor, making him the scapegoat for any unfortunate farm happenings, and offering a bounty for Snowball - dead or alive. Napoleon's psychotic fear of his rival also led to his purge of the animals suspected to be in league with Snowball. Hence, his adversary being in exile, with his whereabouts a mystery, was by far more threatening to Napoleon than having him blatantly opposing him in the farm. Such was depth of the rivalry and hatred between them. AF - literature essay Q1 1 ...read more.