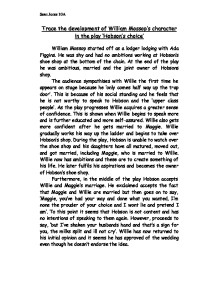 Trace the development of William Mossop's character in the play 'Hobson's choice' William Mossop started off as a lodger lodging with Ada Figgins. He was shy and had no ambitions working at Hobson's shoe shop at the bottom of the chain. At the end of the play he was ambitious, married and the joint owner of Hobsons shop. The audience sympathises with Willie the first time he appears on stage because he 'only comes half way up the trap door'. This is because of his social standing and he feels that he is not worthy to speak to Hobson and the 'upper class people'. As the play progresses Willie acquires a greater sense of confidence. This is shown when Willie begins to speak more and is further educated and more self-assured. ...read more.

To this point it seems that Hobson is not content and has no intentions of speaking to them again. However, proceeds to say, 'but I've shaken your husbands hand and that's a sign for you, the milks split and ill not cry'. Willie has now returned to his initial opinion and it seems he has approved of the wedding even though he doesn't endorse the idea. Later on in the play Hobson has a word with Willie with and pronounces 'you're the best of the bunch, a backward lad but you no your trade and it's an honest one. This gives Willie additional confidence. Willie visits the local pub, 'The Moonrakers' on a daily basis with his friends even though the doctor has told him that he has 'drunk himself within six months of an early grave'. ...read more.

Now Willie makes Hobson a proposal, which is for him and Hobson to go into partnership with Hobson. Hobson is referred to as being a 'sleeping partner' meaning that Hobson is only used for his money and Willie runs the shop. Willie now says that his ambitions are to have shop in 'Saint Ann's square, Manchester' this proves that Willie has become a lot more ambitious than at the beginning of the play when he was afraid to go upstairs in the shop. At the start of the play Willie Mossop was a shy shoe maker working at the bottom of the chain at Hobson's shoe shop. By the end of the play Willie Mossop is an ambitious joint owner of 'Mossop and Hobson's shoe shop' ?? ?? ?? ?? Sean Jones 10A ...read more.