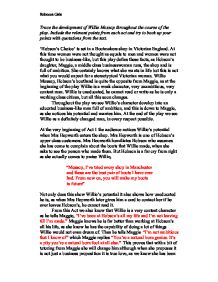 Trace the development of Willie Mossop throughout the course of the play. Include the relevant points from each act and try to back up your points with quotations from the text.

Trace the development of Willie Mossop throughout the course of the play. Include the relevant points from each act and try to back up your points with quotations from the text. 'Hobson's Choice' is set in a Bootmakers shop in Victorian England. At this time women were not thought as equals to men and women were not thought to be business-like, but this play defies these facts, as Hobson's daughter, Maggie, a middle class businesswoman runs, the shop and is full of ambition. She certainly knows what she wants in life but this is not what you would expect for a stereotypical Victorian woman. Willie Mossop, Hobson's boothand is quite the opposite from Maggie, as at the beginning of the play Willie is a weak character, very unambitious, very content man. Willie is uneducated, he cannot read or write as he is only a working class citizen, but all this soon changes. Throughout the play we see Willie's character develop into an educated business-like man full of ambition, and this is down to Maggie, as she notices his potential and marries him. At the end of the play we see Willie as a definitely changed man, in every respect possible. ...read more.

We know this as he says, "Yes Maggie, I'm resigned! You're growing on me lass, and I'll toe the line with you!" This is the second time in the play we see Willie make a decision for himself, but this decision is important as the rest of his life depends on this decision. This proves that Willie is a slightly stronger character but the marriage is still just a business proposition. Despite the fact that Willie is now able to make decisions for himself he is still a rather humble character as Vicky asks Willie if he has got the rings and Maggie replies, "I have. Do you think I trust him to remember?" This shows us Maggie still takes charge of everything and does not trust Willie to do anything. Act Three is set later the same day after the couple have got married and everybody is at Maggie and Willie's for the after wedding party, apart from Hobson. Willie decided to make a speech this shows how much his reading has improved, although he is still in Maggie's shadow as when Willie is making the speech Maggie has to correct him, "generous" she says when he forgets the word he is looking for. ...read more.

His terms were that they would only move back if Willie owns half of Hobson's shop and Hobson is a silent partner. He even says he cannot refuse because Willie owns a business that is starving Hobson's to death, as Willie says, "Me that's the owner of a business that's starving yours to death" Willie even stands up to Maggie because Willie wants the sign above the shop door to read, 'Mossop and Hobson' but Maggie disagrees. So Willie says, "Its Mossop and Hobson or its Oldfield Road for us, Maggie!" Eventually Maggie gives in, just proving that now she is the weaker character and Willie is the stronger, more dominant one, and in Victorian England it was thought that that was how it should be. At the end of the act Willie proves that he still wants continue in his successful career by moving to St Anne Square the street where all the upper class citizens shop, Willie says to Maggie, "Its no further from Chapel Street to Saint Anne's Square than it is from Oldfield Road to Chapel Street." Finally when you look at Willie's character in detail throughout the play you can see the drastic improvement in him, he is confident, bright, strong and no longer a farcical character. He is definitely now a stereotypical Middle Class Victorian businessman that Maggie knew one day he would be. Rebecca Gale ...read more.