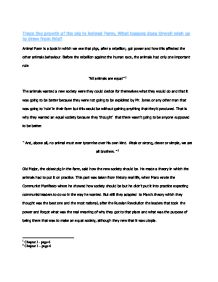 Trace the growth of the pig in Animal Farm, What lessons does Orwell wish us to draw from this?

Trace the growth of the pig in Animal Farm, What lessons does Orwell wish us to draw from this? Animal Farm is a book in which we see that pigs, after a rebellion, got power and how this affected the other animals behaviour. Before the rebellion against the human race, the animals had only one important rule "All animals are equal" 1 The animals wanted a new society were they could decide for themselves what they would do and that it was going to be better because they were not going to be exploited by Mr. Jones or any other man that was going to 'rule' in their farm but this would be without gaining anything that they'd produced. That is why they wanted an equal society because they 'thought' that there wasn't going to be anyone supposed to be better. " And, above all, no animal must ever tyrannise over his own kind. Weak or strong, clever or simple, we are all brothers." 2 Old Major, the oldest pig in the farm, said how the new society should be. He made a theory in which the animals had to put it on practice. This part was taken from history real life, when Marx wrote the Communist Manifesto where he showed how society should be but he didn't put it into practice expecting communist leaders to do so in the way he wanted. ...read more.

In here pigs are used as a metaphor for saying what humans really are . The power started corrupting pigs, like in the first day of the harvest when Snowball milked the cows and Napoleon took all the milk. "I shall follow in a few minutes. Forward, comrades! The hay is waiting. ...when they came back in the evening it was noticed that the milk had disappeared." 6 The milk had disappeared and the last person seen with it was Napoleon. Here is where we see the first signal of a non-equalitarian society. Napoleon wanted the milk just for the pigs and he tells that if the other animals wanted to live prosperouslythey had to give them the milk and apples. "The mystery of where the milk went to was soon cleared up, it was mixed every day into the pigs mash." 7 Snowball, Napoleon and the other pigs however, convinced them by Squealer voice. They manipulated the other animals that believed everything they were told by pigs. "It is for your sake that we drink that milk and eat those apples. Do you know what would happen if we pigs failed in our duty? Jones would come back!" ...read more.

Napoleon is absolutely corrupt because of the absolute power he had. At the start of the fabel the revolution is against the corrupt man that was another kind of pig, at the end the novel is about the corruption in the pigs . We see the development of the pigs, at the start they are the organizers but they didn't take any decision without consulting all of the animals, then when men were eliminated from "Animal Farm" they started to have some privileges they excused them by saying that they were good. Napoleon ambitions makes him go against Snowball because he was ruining his interests. Then we see that being in the power as the leader, makes you follow your nature, Napoleon becomes a dictator. At the end the animals return to the old regimen, just were a few people govern the rest . Melissa Vega IB - One 'Bath' (1 556 words) 1 Chapter I - page 6 2 Chapter I - page 6 3 Chapter I - page 6 4 Chapter II - page 9 5 Chapter II - page 14 6 Chapter II - page 15 7 Chapter III - page 21 8 Chapter III - page 21 9 Chapter V - page 32 10 Chapter V - page 33 11 Chapter II - page 14 12 Chapter VI - page 41 ...read more.