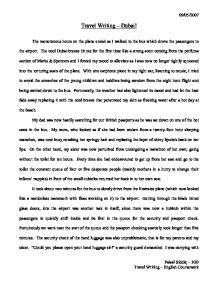 Travel Writing - Dubai! The monotonous hours on the plane ended as I walked to the bus which drove the passengers to the airport. The cool Dubai breeze hit me for the first time like a strong scent coming from the perfume section of Marks & Spencers and I forced my mood to alleviate as I was now no longer tightly squeezed into the torturing seats of the plane. With one earphone piece in my right ear, listening to music, I tried to avoid the screeches of the young children and toddlers being awoken from the eight hour flight and being carried down to the bus. Fortunately, the weather had also lightened its mood and had let the heat fade away replacing it with the cool breeze that penetrated my skin as freezing water after a hot day at the beach. My dad was now hastily searching for our British passports as he was sat down on one of the hot seats in the bus. My mum, who looked as if she had been woken from a twenty-four hour sleeping marathon, was now busy combing her springy hair and replacing the layer of shiny lipstick back on her lips. ...read more.

He was exasperated even further to find out that we weren't even getting a free room for ten hours inside the airport. My sister who could no longer now hold her self plodded off to the nearest ladies toilets and all of us were thankful that the constant groaning had now ceased. After quickly booking one of the rooms in the hotel which was inside the airport it self, we rushed off to catch the rest of the eight hours of sleep left. My sister who was already relieved of one problem now had another urge to spend hours in the Claires Accessories fashion shop that she had caught a glimpse of near MacDonald's. But she was wise enough to know to what extent our tired parents could be pushed, so she decided to keep her mouth shut. After taking a much needed nap for seven hours we all took a soothing hot shower and got all of our hand luggage ready. The hotel room was perfect. The circular window on one side of the room showed the perfect view of the inside of the Dubai Hotel. ...read more.

After some peculiar looks from tourists and other people in the airport we were slightly more relaxed when we reached the doors to our terminal, where everybody was wearing similar clothing to us. My mind wondered off - daydreaming about the next adventure we were about to encounter at the next stage of our trip. Images came into my mind , when we were back home, about my dad telling me about Saudi Arabia and the torturing heat that awaited us. I also thought about the images I had seen of this holy country and I aspired to see what the core of the Islamic faith held in store for us. After ten minutes or so the long awaited announcement sounded our ears; "Please could passengers for flight number seven - zero - three to Saudi Arab make their way to the terminal gates". The long ten hours had given us a chance to rest and gave us a taste of the zest and excitement of Dubai. No doubt I was looking foreword to coming back to Dubai after two weeks and indulging myself in the excitement of exploring all of Dubai. ?? ?? ?? ?? 09/05/2007 Faisal Siddiq - 10D Travel Writing - English Coursework ...read more.