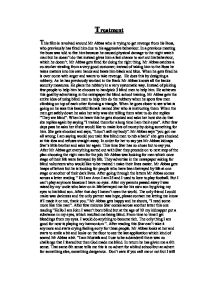 Treatment This film is revolved around Mr Abbas who is trying to get revenge from his Boss, who previously has fired him due to his aggressive behaviour. In a previous meeting the boss was told to fire him because he caused physical damage to the night watch man but he doesn't do that instead gives him a last chance to sort out his behaviour, which he doesn't. Mr Abbas gets fired for doing the right thing. Mr Abbas catches a co-worker stealing from a very good customer; instead of taking him to the Boss he takes matters into his own hands and beats him black and blue. When he gets fired he is over come with anger and wants to take revenge. He does this by designing a robbery. As he has previously worked in the Bank Mr Abbas knows all the banks security measures. He plans the robbery in a very systematic way. Instead of picking few people to help him he chooses to handpick 3 blind men to help him. He achieves this goal by advertising in the newspaper for blind school training. Mr Abbas gets the entire idea of using blind men to help him do the robbery when he spots few men climbing on top of each other forming a triangle. When he goes closer to see what is going on he sees this beautiful female named Star who is instructing them. When the men get safely down he asks her why was she telling them what to do she replies "They are blind". When he hears this he gets shocked and asks her how she do that she replies again by saying "I trained them for a long time I am their eyes". After few days pass he asks her if she would like to make lots of money by doing something for him. She gets shocked and says, "I don't sell my body". ...read more.

After Mustafa gets near the receipt desk, Mustafa turns around and walks straight. The men that is sitting next to John who is Mr Abbas tells John to walk NOW because it was times perfectly John and Mustafa bump into each other causing the briefcase in Mustafa's hands to drop as Mustafa and John bend over to pick up the brief case they pass each other the gun. Then Mustafa goes and sits down on the chairs, John goes and stands next to the telephone box in the bank. Aron walks in wearing a hijab. As he enters the bank he drops something on the floor. But instead of the security guard picking up the staff a person who was walking pass helps Aron but as Aron cant see he thinks it's the security guard and sprays the men but luckily for Aron the security guard was looking the other way. As Aron don't know about this he tries to pull out his gun as one of the ladies screams and the security guard standing shouts out what happened madam. Then Aron quickly realises that it wasn't the security guard and move the men to one side. The security guard comes back and looks at Aron and says " are you still standing here Mrs let me help you" as he bends over Aron sprays him too and takes him to one side. Then he pulls out a gun and points towards the ceiling and shoots. As Aron shoots everyone starts to run all around the bank. As soon as Mustafa and John here the gun shot they too get up and pull out their guns and point everywhere. Mustafa shouts out telling everyone to get to one side of the bank. Then Mustafa does the most important thing goes and breaks the alarm system after he does that he tries to stop the door from locking he puts all the training that he has done for this part into practise. ...read more.

Policemen get shocked and they look at Mr Abbas that these people robbed the bank that can't even walk with out the aid of a walking stick. And what are these 2 bodies doing here? Who killed them? Mustafa and Aron tell the policemen that Mr Abbas shot them and he kidnapped them so they can take responsibility for some crime he committed. Mustafa tells the police that the man and lady that are laying dead were his partners and he took some money from some bank and hid it some where when his two partners came to ask for their share he just shot them. Mr Abbas gets shocked and tells the policemen to come with him because there is a replicate of the bank at the back of this center. The policemen along side with Mustafa and Aron follow Mr Abbas to the back of the center and to Mr Abbas's amazement there's nothing there except an empty hall. Then Mr Abbas looks at Mustafa and Aron and the policemen telling them that there was a replicate of the bank here. Mustafa and Aron tell the policemen that he might be mad and take him away. The police arrest Mr Abbas on suspicion of murder of two of his partners. After the police leaves with Mr Abbas. Mustafa and Aron look towards each other and say where could had John hidden the money, after few minutes of thinking Mustafa says to Aron what's the only thing in the world that John loves and keeps with him Aron shouts out the harmonium. They both walk over to John's room and search about bumping into staff and then Aron puts his hands on something which make a funny noise. Mustafa and Aron pick up the harmonium and open it up, there the money was all along in the center and no one knew about it. Mustafa and Aron take the money and throw it in the air. ...read more.