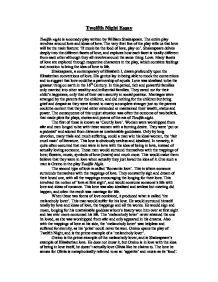 Twelfth Night Essay Twelfth night is a comedy play written by William Shakespeare. The entire play revolves around love and ideas of love. The very first line of the play tells us that love will be the main feature: 'If music be the food of love, play on'. Shakespeare delves deeply into the different facets of love, and explores how each facet is totally different from each other although they all revolve around the same thing: Love. Many facets of love are explored through respective characters in the play, which combine feelings and emotion to bring the idea of love to life. Shakespeare, a contemporary of Elizabeth I, draws profoundly upon the Elizabethan conventions of love. His genius lay in being able to mock the conventions and to suggest that love could be a partnership of equals. Love was idealised to be the greatest thing on earth in the 16th Century. In this period, rich and powerful families only married into other wealthy and influential families. They cared not for their child's happiness, only that of their own security in social position. Marriages were arranged by the parents for the children, and did nothing for the children but bring grief and despair as they were forced to marry a complete stranger just so the parents could be content that they had either extended or maintained their wealth, status and power. The consequence of this unjust situation was often the outcome of two beliefs, that made plots for plays, stories and poems of the era of Twelfth night. ...read more.

No one dares or can expose this truth to Olivia, as of social position she is very high. Only Feste, the allowed fool, can expose this troubling truth to Olivia and make her put a stop to the madness. He exposes the theatricality of her mourning by bringing common sense to the proceedings: 'the more fool, Madonna to mourn for your brother's soul being in heaven' Olivia's love, like Orsino's, is often described as 'sentimental'; as Olivia thinks highly of her own good looks, 'Is't not well done?', also she is quickly infatuated by Viol's appearance, 'not so fast! Soft, soft!' and as of which she constantly beseeches Viola to visit her. Olivia's actions could be explained because of how she has been brought up. Her father and brother protected her intensively from the world and this can shape personality. One reason she is rejecting Orsino so vividly is because she suspects that he, like her male relatives, will simply dominate her and overprotect her. Olivia's artificial mourning for her brother is further exposed by her abrupt decision to see and welcome-in Cesario. Olivia already made it crystal clear that she has no intention to yield to Orsino's messages, so why does she wish to listen to Cesario wooing on Orsino's behalf? Olivia hurriedly dismisses her attendants away after hearing Cesario, even though she has no intention of listening to Orsino's longing. Olivia then unveils her face, after agreeing to 'draw the curtain and show' Cesario 'the picture'. She has done this to no one since she started the mourning process and it is very odd that she does this to someone she barley knows at all. ...read more.

Malvolio is in deep love with himself. He is vain and bigheaded. He feels that he should be loved by others, and is tricked into believing that Olivia loves him. He is easily tricked, as he believes that she should love him, for he is both wonderful and easily adored, in his own perspective. He pays the price for this flaw, as he realises that he has been tricked and that he is so vain. This love is called misguided love, as he is literally misguided into believing that she loves him and believing that all should love him. Another type of love is the love of joy. All the characters in the play love the festivities of the Twelfth Night period, and indulge in fun and humour. All the characters accept one. Malvolio is a killjoy. After the trick has been played on him he storms off and swears for revenge. He does this because he still believes he is so great that people dare not or shouldn't play jokes on him. He tries to ruin the fun for the other characters and as such he carries the worst kind of love in him. Throughout the play love is certainly the dominant feature. The entire play revolves around this feature, and all the different types of love are present in it. It makes the play different from the normal love plays as they only usually carry one type of love. This play uses them all to great measure, and makes the play amusing and thoughtful. There are morals in this story as well as humour. Shakespeare draws heavily on the Elizabethan conventions of love and succeeds in bringing them to life and mocking them without harming anyone! By Tom Spence. ...read more.