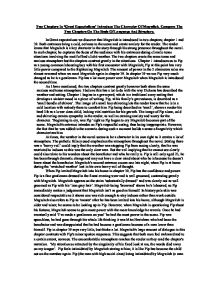 Two Chapters In Great Expectations Introduce The Character Of Magwitch. Compare The Two Chapters On The Basis Of Language And Structure.

Two Chapters In 'Great Expectations' Introduce The Character Of Magwitch. Compare The Two Chapters On The Basis Of Language And Structure. In Great expectations we discover that Magwitch is introduced in two chapters; chapter 1 and 39. Both entrances bring a cold, eeriness to the scene and create anxiety for the reader. The reader learns that Magwitch is a key character in the story through his strong presence throughout the novel. In each chapter, he captures the focus of the audience with his entrances during climatic tense situations involving the motif of bad clich� weather. The two chapters create the same tense and anxious atmosphere but the chapters contrast greatly in the situations. Chapter 1 introduces us to Pip as a young common labouring boy with his first encounter with Magwitch; Pip at this point has very little power compared to the frightening Magwitch. The amount of power in the 2 characters roles are almost reversed when we meet Magwitch again in chapter 39. In chapter 39 we see Pip very much changed as he is a gentleman. Pip has a lot more power over Magwitch when Magwitch is introduced the second time. ...read more.

However, when Magwitch is questioning Pip about his fortune, Magwitch seems to gain more power with the more knowledge he reveals. Once he had eventually said 'I've made a gentleman on you!' he had the most power in the scene. Pip was speechless, he had gone through his whole life thinking it was Miss Havisham who had been the benefactor and was disappointed that he had become a gentleman because of a man lower than himself. Pip in chapter 39 says very little, but thinks a lot. Magwitch's large amount of dialogue in this chapter contrasts with Pip's minor spoken responses. This suggests that both men feel awkward and to a certain extent, nervous. The uncomfortable atmosphere reaches the reader as they read the chapter's narration. 'My attention so attracted by the singularity of his fixed look at me, the words died away on my tongue'. Pip feels intimidated by Magwitch staring at him; it is like Pip has become the child out on the marshes again. Pip (the man with high social class) being intimidated by Magwitch (a man who was so low compared to Pip), shows how much power Magwitch had in this scene. ...read more.

The descriptions often leave us with unpleasant pictures like 'overgrown with nettles', this description shows the area is run down as it isn't in perfect order, it is quite an abandoned place. The unpleasant setting has a strong bleak atmosphere which matches well with the two characters bad situations. Pip and Magwitch are both having negative experiences in their lives, although they're not keen on each other, they have similarities. This could represent the lower class should stick together in hard times like work houses or even daily struggles; struggles which the upper class would often frown upon. Also in chapter 1, Pip is innocently visiting his dead family but encounters an intrusion from Magwitch. I think this causes tension in the scene because it seems disrespectful towards Pip, disturbing him at this time. Chapter 39 had more emotive language and atmosphere, although Pip has the most power, I still think he fears Magwitch. Even after Magwitch admitted he was the benefactor. 'He took both my hands and put them to his lips, blood ran cold within me' this shows Pip still has negativity towards Magwitch but the description of these feelings in chapter 39 has more depth than in chapter 1. ...read more.