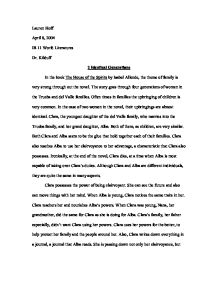 Two Identical Generations in the book 'The House of the Spirits' by Isabel Allende.

Lauren Hoff April 8, 2004 IB 11 World Literatures Dr. Kilduff 2 Identical Generations In the book The House of the Spirits by Isabel Allende, the theme of family is very strong through out the novel. The story goes through four generations of women in the Trueba and del Valle families. Often times in families the upbringing of children is very common. In the case of two women in the novel, their upbringings are almost identical. Clara, the youngest daughter of the del Valle family, who marries into the Trueba family, and her grand daughter, Alba. Both of them, as children, are very similar. Both Clara and Alba seem to be the glue that hold together each of their families. Clara also teaches Alba to use her clairvoyance to her advantage, a characteristic that Clara also possesses. ...read more.

Not only is clairvoyance in common between the two, but the names Alba and Clara have the same meaning, which was chosen intentionally by Clara, and her daughter, Blanca, Alba's mother. When Clara was a young child, she tended to hold her family together. She was very close to her sister Rosa, since they were both different, they bonded easily. Clara predicted Rosa's death. Also, Clara was very close to her Uncle Marco. No one cared too much for Uncle Marco's crazy stories and wild adventures, except for Clara. Along with Uncle Marco, she was close to Nana, whom she turned to for comfort when Rosa died. In comparison, Alba has similar people in her life. Alba has green hair, as Rosa had had. She resembles Rosa in many aspects and has a similar bond with Clara and Clara had had with Rosa. ...read more.

Clara lived just long enough to teach her grand daughter how to fill her shoes. Not only does Clara believe Alba is old enough, but mature enough to us her powers to protect her family, just as Clara has tried to do with Rosa's death, and the earthquake. In death, Clara passes to Alba how she over came everything through out her life, which Alba uses to her advantage. This story follows through four generations of women, even though the focus is on two of them. The story of Clara almost predicts what will be Alba's story as she lives her life. Clara and Alba's life start out identical, same influences, same powers. Also, they hold together their families, a power that Clara passes on to Alba as she passes. Clara and Alba can be seen as the same person, who lived during different times. Words: 790 ...read more.