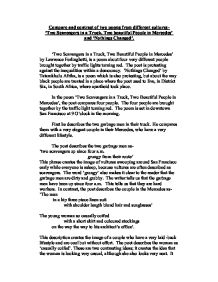 Compare and contrast of two poems from different cultures- 'Two Scavengers in a Truck, Two beautiful People in Mercedes' and 'Nothings Changed'. 'Two Scavengers in a Truck, Two Beautiful People in Mercedes' by Lawrence Ferlinghetti, is a poem about four very different people brought together by traffic lights turning red. The poet is protesting against the inequalities within a democracy. 'Nothings Changed' by Tatamkhulu Afrika, is a poem which is also protesting, but about the way black people are treated in a place where the poet used to live, in District Six, in South Africa, where apartheid took place. In the poem 'Two Scavengers in a Truck, Two Beautiful People in Mercedes', the poet compares four people. The four people are brought together by the traffic light turning red. The poem is set in downtown San Francisco at 9 O'clock in the morning. First he describes the two garbage men in their truck. He compares them with a very elegant couple in their Mercedes, who have a very different lifestyle. The poet describes the two garbage men as- 'two scavengers up since four a.m. grungy from their route' This phrase creates the image of vultures swooping around San Francisco early while everyone is asleep, because vultures are often described as scavengers. The word 'grungy' also makes it clear to the reader that the garbage men are dirty and grubby. The writer tells us that the garbage men have been up since four a.m. ...read more.

punctuation; 'A bright yellow garbage truck with two garbage men in red plastic blazers standing on the back stoop' I think that the poet did this to emphasise the point he is trying to make, that everyone is different. Whereas 'Two Scavengers in a Truck, Two Beautiful People in Mercedes' is a poem protesting about the lack of democracy of this world. 'Nothings Changed' is a poem protesting about the divisions in his society. 'Nothings Changed' is a poem about Distract 6 in South Africa a place where black people were made to live. It was then bulldozed and all the black people were made to move out. But now it has been turned from a wasteland to having a white's only restaurant built on it. The poet reflects on how nothing has changed in the attitude towards black people since he used to live there when apartheid was in place, even though apartheid is meant to have been stopped. In the second stanza, the poet says that there is no board to say that it is district six. 'District Six No boards says it is:' He goes on to say that, even though there is no board he can feel it in his body. 'but my feet know, and my hands, and the skin about my bones, and the soft labouring of my lungs, and the hot, white, inwards turning anger of my eyes'. This suggests that the feeling that he gets when he is in district six has stayed in his body for along time and he still gets it. ...read more.

This also makes the poem feel more important and meaningful, as it is written in the form of an important document. The main similarities of the two poems are that they are both protesting about something the poet feels strongly about; 'Nothings Changed' is protesting about the divisions in society and how black people should be treated the same as white people. Similarly, 'Two Scavengers in a Truck, Two Beautiful People in Mercedes' is protesting about people not being treated equally and how the democracy of a country works. The main differences of the poems are the way they have been written; 'Two Scavengers in a Truck, Two Beautiful People in Mercedes' is written in a less formal, more relaxed way. Whereas 'Nothings Changed' is written in an angry manner, and the writer clearly wants to make himself heard. The poet, Tatamkhulu Afrika also talks about his own personal experiences, but on the other hand Lawrence Ferlinghetti, just writes about people he might have seen on the street. I personally preferred 'Nothings Changed' by Tatamkhulu Afrika, although I really liked 'Two Scavengers in a Truck, Two Beautiful People in Mercedes' by Lawrence Ferlinghetti, I thought 'Nothings Changed' was more thought provoking and I think I learnt more about the poet from it, because he was not afraid to express his feelings and opinions. However, I agree with both of the poets on their opinions. I think that everyone should be treated equally and no one should be made to feel like they are worse than someone else, just because they do not have a sophisticated car or because they are a different race or colour. ...read more.