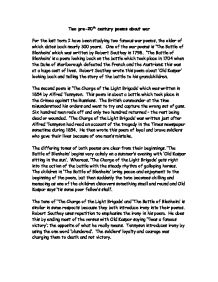 Two pre-20th century poems about war For the last term I have been studying two famous war poems, the older of which dates back nearly 300 years. One of the war poems is 'The Battle of Blenheim' which was written by Robert Southey in 1798. 'The Battle of Blenheim' is a poem looking back on the battle which took place in 1704 when the Duke of Marlborough defeated the French and the Austrians; this was at a huge cost of lives. Robert Southey wrote this poem about 'Old Kaspar' looking back and telling the story of the battle to his grandchildren. The second poem is 'The Charge of the Light Brigade' which was written in 1854 by Alfred Tennyson. This poem is about a battle which took place in the Crimea against the Russians. The British commander at the time misunderstood his orders and went to try and capture the wrong set of guns. Six hundred men rode off and only two hundred returned - the rest being dead or wounded. 'The Charge of the Light Brigade' was written just after Alfred Tennyson had read an account of the tragedy in the Times newspaper sometime during 1854. He then wrote this poem of loyal and brave soldiers who gave their lives because of one man's mistake. ...read more.

'All in the valley of death' helps to create a picture of what it was like by using metaphors. Robert Southey does not use any metaphors but there is still imagery contained in the narrative of the poem. There is lots of repetition used in the 'The Battle of Blenheim' which helps to create the ironic effect of the poem. At the ends of verses 3, 4, 6, 8, 9 ,10 and 11 he repeats the phrases 'great victory' and 'famous victory'. By the end of this poem he makes it sound as if this is what he was told the war was like by his parents and that is how he wants it to stay so at very end he quickly says 'twas a famous victory'. Alfred Tennyson uses repetition to make the poem have a dramatic effect but also because it fits into the rhythm of the poem. 'The Battle of Blenheim' is set out in eleven verses with four lines in each verse, this is a typical structure for a ballad with stanzas arranged in it. 'The Charge of the Light Brigade' has six verses with different amounts of lines in nearly every one. 'The Charge of the Light Brigade' had a dactylic rhythm which helps to create the effect of galloping horses. ...read more.

I think both these types of propaganda are very successful though I think what Robert Southey was trying to convey was quite a bit clearer in his poem than in Tennyson's. I believe this is because what he was trying to tell people is easier to understand and most people in the twenty first century know that was is not such a great thing. However, when Southey wrote this poem people might not have thought in this way and so this poem could have seemed quite radical at the time. Another reason why his message is clearer is because the structure of his poem is simpler making it accessible for ordinary people to understand. Though both of these poems are about war and propaganda I still believe that they are very different because of the way they are written and their meanings. Personally I prefer 'The Charge of the Light Brigade' because of the language the poet uses for example: 'Boldly they rode and well' [which also shows his use of onomatopoeia] and 'Theirs not to make reply, Theirs not to reason why, Theirs but to do and die' Also I like the way Tennyson uses the rhythm of the charging horses throughout the whole poem. Reading this makes me feel as if I could see the six hundred charging through the battlefield in my mind's eye. This also makes me feel for the four hundred that never returned back from their pointless mission. ...read more.