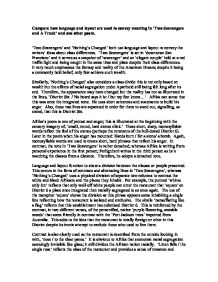 Two Scavengers and Nothings Changed both use language and layout to convey the writers ideas about class differences.

Compare how language and layout are used to convey meaning in 'Two Scavengers and A Truck' and one other poem. 'Two Scavengers' and 'Nothing's Changed' both use language and layout to convey the writers' ideas about class differences. 'Two Scavengers' is set in 'downtown San Francisco' and it serves as a snapshot of 'scavenger' and an 'elegant couple' held at a red traffic light and being caught in the same time and place despite their class differences. It very much emphasises the fantasy and reality of the American Dream; despite it being a commonly held belief, only few achieve such wealth. Similarly, 'Nothing's Changed' also considers a class divide this is not only based on wealth but the effects of racial segregation under Apartheid still being felt long after its end. Therefore, the appearance may have changed but the reality has not as illustrated in the lines, 'District Six. / No board says it is: / but my feet know...' Afrika can sense that this was once the integrated zone. He uses short sentences and statements to build his anger. Also, these two lines are separated in order for them to stand out, signalling, as stated, that this is District Six. Afrika's poem is one of protest and anger; this is illustrated at the beginning with the sensory imagery of, 'small, round, hard stones click.' These short, sharp, monosyllabic words reflect the feel of the stones (perhaps the remnants of the bull-dozed District 6). ...read more.

With the phrase, 'it's in the bone', Afrika conveys how it is assumed that this is a part of the working class and not to do with the fact that they have never experienced anything different. Contrasting language is also used in 'Two Scavengers' as the garbage men wear 'red plastic blazers' personifying a warning or the fact that their lives have stopped just as they've had to stop at the red traffic light. The American dream is determined by their being two sides: the haves and the have nots. Therefore, the architect in the Mercedes wears a cool 'linen suit'; the cloth reflects his wealth. Imagery such as the Scavengers being described as 'gargoyle quasimodos' reflects that they're ugly but just like beautiful churches need gargoyles to ward off evil, the Scavengers are needed just as much as the architect to make the city aesthetically pleasing . The lines here are scattered much like the rubbish the bin men collect. The second and third verses are contrasted as one describes the elegant couple and the other the Scavengers but there is a connection in the end of the third verse as the Scavengers look in the Mercedes. This form of the layout reflects the class division but enhances the fact they're part of the American dream. The lines always meet in the middle reflecting how they all have to stop at the red light, despite their disjointed lives as signified by the form. ...read more.

The layout reflects the division in the social classes and reflects the 'waves' suggested by the high seas. The divisions reflect that although they exist in the same 'small gulf' that in itself is a physical division as some people, like the architect, ride the waves of success in democracy, using their freedom to achieve the American dream; however, others remain on smaller wavers, trapped within their social position or class and unable to reach the towering heights of fulfilling the American dream of money and success. In conclusion, both poems combine the language and layout to enhance their messages about social division. Whereas the segregation is emphasises by the division of two columns to show the division between the white and black, poor and rich South Africans, the fact that the site or place of segregation used to be one of integration is emphasised by the persona's reaction to the place and the 'white only inn' to add extra poignancy. Similarly, in 'Two Scavengers' the 'couples' inhabit the same world yet the alternating, contrasting lines emphasises their contrasting lives based on social differences, although there is the ironic positioning of the Scavengers 'looking down' at the 'elegant couple', they are never going to possess the American dream despite their work in being part of it in making the city look appealing, just like the architect; thus the jagged lines of comparison and contrast reflect how the classes are compelled and repelled by one another within a snapshot of time and place. ...read more.