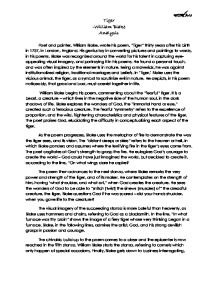 Tiger -William Blake Analysis Poet and painter, William Blake, wrote his poem, "Tiger" thirty years after his birth in 1757, in London, England. His genius lay in converting pictures and paintings to words, in his poems. Blake was recognized around the world for his talent in capturing eye-appealing visual imagery, and portraying it in his poems. He found a personal touch, and was often inspired by the elements in nature. Being a maverick, he was against institutionalized religion, traditional marriages and beliefs. In 'Tiger,' Blake uses the vicious animal, the tiger, as a symbol to scrutinize evil in nature. He depicts, in his poem noticeably, that good and bad, must coexist together in life. William Blake begins his poem, commenting about the "fearful" tiger. ...read more.

The poem then advances to the next stanza, where Blake remarks the very power and strength of the tiger, and of its maker. He contemplates on the strength of him, having 'what shoulder, and what art," when God creates the creature. He sees the wonders of God to be able to "snitch [twist] the sinews [muscles] of" the dreadful creature, the tiger. Blake questions God if he was scared - did your hands shudder, when you gave life to the creature? The visual imagery of the succeeding stanza is more baleful than heavenly, as Blake uses hammers and chains, referring to God as a blacksmith. In the line, "In what furnace was thy brain" shows the image of a fiery tiger whose very thinking began in a furnace. ...read more.

To reiterate, Blake states that both good and evil must co-exist peacefully - there is good and innocence while at the same time, there's violence and evil. William Blake, uses repetition to reinforce his ideas and thoughts, in the last stanza. This is a fearless immortal who has created both the docile lamb, and the fiery tiger. To consider the creature, we are to consider the creator. It is seen throughout that one must compare and contrast the beast (the tiger) with the tamed one (the lamb), and consider the proper balance of nature framed by the immortal. Blake brilliantly demonstrates the contrasting creatures in nature, and how we, humans, must coexist peacefully. Later criticisms have the compared the tiger to Christ, implying that Christ is not a soft, forgiving soul, but a ferocious one, like the tiger, while punishing sinners. ?? ?? ?? ?? Rohan M ...read more.