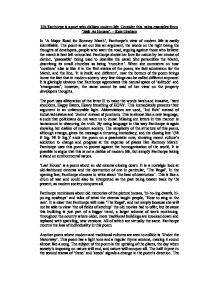 UA Fanthorpe is a poet who dislikes modern life. Consider this, using examples from 'Safe As Houses'.

UA Fanthorpe is a poet who dislikes modern life. Consider this, using examples from 'Safe As Houses'. - Kate Graham In 'A Major Road for Romney Marsh', Fanthorpe's view of modern life is easily identifiable. The poem is set out like an argument, the words on the right being the thoughts of developers, people who want the road, arguing against those who believe the marsh is best left untouched. Fanthorpe shows her love for nature by her choice of diction, 'peaceable' being used to describe the canal. She personifies the Marsh, describing its small churches as being 'truculent'. When she comments on how 'nowhere' else is like it in the first stanza of the poem, we feel admiration for the Marsh, and the line, 'It is itself, and different', near the bottom of the poem brings home the fact that in modern society very few things can be called different anymore. ...read more.

Fanthorpe reminisces about old memories of the picture houses, 'hi-ho-ing dwarfs, hi-yo-ing cowboys' and talks of what the cinema taught people, 'How to sing in the rain'. It is clear that Fanthorpe will miss 'The Regal', and not simply because she will not be able to view 'the oil fields of ketchup' the old movies had to offer, but because this building is just part of a bigger trend, a larger scheme of work continuing throughout the country where older, more traditional buildings are knocked down and replaced with sparkling, new versions. All of which are virtually the same. Fanthorpe mourns the loss of individuality in this poem. Another poem where modern and traditional cultures are seen to collide is 'Under the Motorway'. This poem has a light tone and a regular rhyme scheme, making it sound almost like a song. The subject of the poem is the uprising of the plants, the day when society's imposing on nature will end, and nature will conquer all. ...read more.

She then described what they have become today, 'shaggy and hungry' ponies, who are unable to measure up to their former selves. She shows her dislike of modern like again in this poem, by mocking it in the third stanza. Modern humans are described as 'telly idols' and 'fat men in fast cars'. Fanthorpe genuinely does seem to hate what we have become. In answering the question however, I have to fully consider the third stanza of 'DNA'. Although Fanthorpe dislikes and even pokes fun at society in this verse, she comments on how, just like a horse in which you can sometimes see 'some long-extinguished breeding', occasionally 'something' in humanity 'reverts to the fine dangerous strain.... of Arthur the King'. Fanthorpe comments that although modern life is not something she particularly admires, she does see something worth looking for in life, a ray of hope on the horizon. To conclude, UA Fanthorpe may well find objectionable what society has turned into, but is still optimistic on what we can become. ...read more.