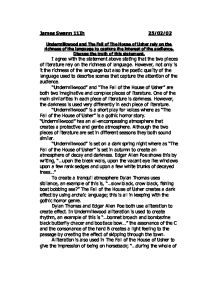 Undermilkwood and The Fall of The House of Usher rely on the richness of the language to capture the interest of the audience. Discuss the truth of this statement.

Dylan Thomas and Edgar Allen Poe both use alliteration to create effect. In Undermilkwood alliteration is used to create rhythm, an example of this is "...bonnet broach and bombazine black butterfly chacer and bootlace bow..." the assonance of the C and the consonance of the hard B creates a light feeling to the passage by creating the effect of skipping through the town. Alliteration is also used in The Fall of the House of Usher to give the impression of being on horseback; "...during the whole of a dull, dark and soundless day..." the alliteration of the D is onomatopoeic. In "Undermilkwood" Dylan Thomas writes in long but very quick sentences. This is because he uses very simple punctuation, which makes very quick flowing sentences. ...read more.

Poe creates his atmosphere by writing, "When the clouds hung oppressively low in the heavens. I had been passing alone on horseback through a singly dreary tract of country..." The closer he got to the house the gloomier and darker it became, an example of this is, "...but with a shudder even more thrilling than before - upon the remodelled and inverted image of the grey sedge, and the ghostly tree stems and the vacant eye like window..." Poe writes the first paragraph in such a way that it captures the reader's attention and makes him involved in the play. After reading both passages, The Fall of the House of Usher and Undermilkwood. I have decided that I prefer Undermilkwood as it has in my opinion a richer language, which is more flowing and has rhythm, which makes it enjoyable to read. ...read more.