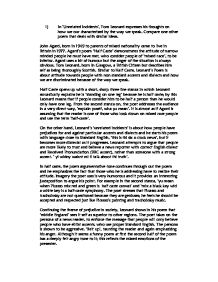 Unrelated Incidents And Half Caste Comparison

i) In 'Unrelated Incidents', Tom Leonard expresses his thoughts on how we our characterised by the way we speak. Compare one other poem that deals with similar ideas. John Agard, born in 1949 to parents of mixed nationality came to live in Britain in 1977. Agard's poem 'Half Caste' demonstrates the attitude of narrow minded people he must have met, who consider people of 'mixed race', to be inferior. Agard uses a bit of humour but the anger of the situation is always obvious. Tom Leonard, born In Glasgow, a British Citizen but describes him self as being thoroughly Scottish. Similar to Half Caste, Leonard's Poem is about attitude towards people with non standard accents and dialects and how we are discriminated because of the way we speak. Half Caste opens up with a short, sharp three line stanza in which Leonard sarcastically explains he is 'standing on one leg' because he is half caste; by this Leonard means that if people consider him to be half a person than he would only have one leg. ...read more.

The poet stresses that Picasso and trachoivsky are not questioned because they are geniuses; he feels he should be accepted and respected just like Picasso's painting and trachoicsky music. Continuing the theme of prejudice in society, Leonard shows in his poem that 'middle England' sees it self as superior to other regions. The poet takes on the persona of a news reader, to enforce the message that people will only believe people who have elitist accents, who use proper Standard English. The persona is shown to be aggressive. 'Belt up', taunting the reader and again emphasising his anger. Although it seems a funny poem at first the second half of the poem has a deeply felt angry tone to it; this reflects the mixed emotions of the presenter. In half cast, Agard continues to use examples to get his point across, this time a humorous pun, 'mix in de sky...england weather nearly always half caste'. Agard uses such obvious half and half combinations to show how ridiculous it is to look down on people of mixed nationality. ...read more.

Without stanza breaks there isn't much time for pause for reflection. The paired down form of the poem suits the direct straight talking language. Agard uses enjambment in his poem. The poem flows along through four stanzas of different lengths with out punctuation. There a two forward slashes in the poem indicating a break or pause. Furthermore the poem uses very little use of capital letters. The lack of restriction to sentence structure and language emphasise a desire for freedom and openness which suits the theme of the poem. The poem is written in first person to so that the reader can emphasize with the characters feelings. Repetition of the word 'half' also emphasizes the stupidity of the term half caste. The poem is a dramatic monologue. In conclusion both poems are successful in arguing how we are characterised. Agard's poem argues racial prejudice whereas Leonard's poem argues prejudice of dialect. Both poems are in first person and they are set out to make readers realise their own attitudes towards accent and dialects and race. From reading the poem readers eventually senses how outraged both poets are by the idea that a person of mixed nationality or different accent is less than anyone else. ...read more.

This is an essay response to a question that asks about the elements of satire used against narrow-minded people in Tom Leonard's 'Unrelated Incidents' and John Agard's 'Half-Caste'. There is an excellently established focus on the question, though the depth ...

This is an essay response to a question that asks about the elements of satire used against narrow-minded people in Tom Leonard's 'Unrelated Incidents' and John Agard's 'Half-Caste'. There is an excellently established focus on the question, though the depth of analysis and relation to the question could be improved. This means that when the candidate makes a point, they should not only comment on the effect on the reader, but to what extent does that particularly device (structure, irony, use of language) create the satire about the intended recipient of the poem. Doing the latter is perfectly fine for a C grade, but to obtain higher, that candidate should look to show the examiner explicitly that they can relate their analysis back to the question proposed.
As a last note about Response to Question, it is recommended that if their is a specified poem or poet in the question (in this case, Tom Leonard and 'Unrelated Incidents'), then the candidate should begin with analysis on that, rather than the poem of their own selection. The candidate will not lose marks for choosing their own selection over the specified poem, but it is considered standard procedure to discuss the specified poem first.

The Level of Analysis here addresses a broad range of poetic devices used by both Leonard and Agard. The structure of this essay succeeds because it directly encourages comparison ,as the candidate has chosen to approach the poems Point-by-Point, rather than Poem-by-Poem. The latter often seems easier and so is often chosen by candidates of a lower ability, who will then lose marks for not making many strong comparisons between the poems, but to former method is extremely effective in making comparison easier for every point made so this candidate has done well to recognise this.
Where this candidate loses marks though, is that their analysis is not entirely informed by a response to the actual question. The analysis given here could be an analysis of any question on these two poems. The comments here are extensive but very general, and are only ever very implicitly linked back to how the satire is created. For example, where the candidate comment on Leonard and Agard's use of phonetic spelling to instil their own dialect and accent, the candidate has missed the fact that this is to mock the "Standard English" speakers who cannot imagine the prejudice that Leonard and Agard receive for not being able to speak 'properly'. By using phonetics they are forcing readers into speaking as they do; putting them in the situation whereby they themselves look stupid as they try to conform to a Scottish accent of a Jamaican one. This is just one example of where further marks could have been gained if context and a direct link to the question could've fortified the answer.

The Quality of Written Communication is fair. There are no glaring floutings of grammar, spelling or punctuation, but a proof-read and a spell-check before submission of the coursework would've ironed out minor errors that lower this mark. A wider range of vocabulary could have also been used, along with a variety of more complex punctuation points like colons, semi-colons and parentheses. Doing this would show the examiners that the candidate is a confident writer who's analysis if enthusiastic and well-informed of how to properly use the English language.