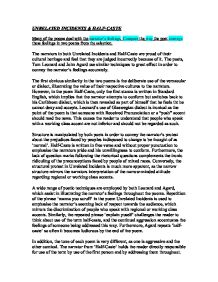 UNRELATED INCIDENTS & HALF-CASTE Many of the poems deal with the narrator's feelings. Compare the way the poet conveys these feelings in two poems from the selection. The narrators in both Unrelated Incidents and Half-Caste are proud of their cultural heritage and feel that they are judged incorrectly because of it. The poets, Tom Leonard and John Agard use similar techniques to great effect in order to convey the narrator's feelings accurately. The first obvious similarity in the two poems is the deliberate use of the vernacular or dialect, illustrating the value of their respective cultures to the narrators. ...read more.

Structure is manipulated by both poets in order to convey the narrator's protest about the prejudices faced by peoples indisposed to change to be thought of as 'normal'. Half-Caste is written in free verse and without proper punctuation to emphasise the narrators pride and his unwillingness to conform. Furthermore, the lack of question marks following the rhetorical questions complements the ironic ridiculing of the preconceptions faced by people of mixed races. Conversely, the structural protest in Unrelated Incidents is much more apparent, as the narrow structure mirrors the narrators interpretation of the narrow-minded attitude regarding regional or working class accents. ...read more.

Furthermore, Agard repeats 'half-caste' so often it becomes ludicrous by the end of the poem. In addition, the tone of each poem is very different, as one is aggressive and the other comical. The narrator from 'Half-Caste' holds the reader directly responsible for use of the term by use of the first person and by addressing them throughout. In contrast, the narrator from 'Unrelated Incidents' mocks the stereotypical views of people and the forced use of Standard English, while subtly criticizing the working class and people with regional accents for not having enough pride. To conclude, the ways in which both poets convey the narrator's feelings in 'Unrelated Incidents' and 'Half-Caste' are similar, but used to create dissimilar effects. ...read more.

The candidate has answered the questions in a very precise, succinct and effective way by addressing a number of poetic devices used by both poets in turn. Where this essay achieves it's effortlessly flowing quality (lending itself to the very ...

The candidate has answered the questions in a very precise, succinct and effective way by addressing a number of poetic devices used by both poets in turn. Where this essay achieves it's effortlessly flowing quality (lending itself to the very effective analysis) is where they do not approach each poem in turn and instead opt for a Point-by-Point approach, comparing a large variety of devices such as structure, tone, and language in one poem with how they are used in the second poem. This creates a more cohesive, consistent essay whose structure is clear and effective in conveying the analysis.

The Level of Analysis shown here is very professional. It indicates a candidate working at a strong A grade because of it's clarity and precision in the points made. The candidate discusses a number of poetic and linguistic devices, making explicit comparisons between 'Unrelated Incidents' and 'Half-Caste's similarities and differences. The argument is balanced and the candidate recognises the importance of each symbol and motif in the two texts.

Though the answer is very concisely-written and deeply analytical, I would propose that the candidate concentrate also on the contextual factors that influence the text. It is the contextual analysis like understanding the purpose of the writing and the attitude and values of the poets that complete an essay like this. Though there is extensive analytical detail, there should also be a more explicit awareness of why the poems were written; this is more an issue for 'Unrelated Incidents', with reference to Scotland's conflict with the English during the expansion of the British Empire and the fact that Scottish BBC speakers are told to speak with an RP accent. As for 'Half-Caste', most of the context lies within Agard's resentment and frustration at the use of the term "half-caste" itself - "caste" translates from Latin as "pure", so the phrase literally means "half-pure". Is it possible Agard is challenging his right to be considered just a "pure" as his white brother? How valid is his refutation? Not just in racist terms, but also that Latin is a dead language - is there residual frustration at the fact white people are clinging onto a dead language as a form of slander in modern times?

The Quality of Written Communication (QWC) is very good. This is easily the strongest part of the essay and really contributes to the clarity and precision of the points made. The use of complex sentences structures and punctuation suggests a candidate who is confident in their use of the English language and someone who is also proficient and expressing their analysis well.