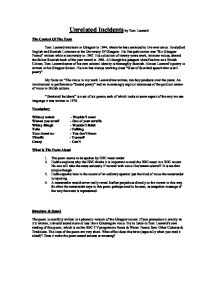 Unrelated Incidents by Tom Leonard The Context Of The Poem Tom Leonard was born in Glasgow in 1944, where he has continued to live ever since. He studied English and Scottish Literature at the University Of Glasgow. His first publication was "Six Glasgow Poems" written while at university in 1967. His collection of twenty-years work, intimate voices, shared the Saltier Scottish book of the year award in 1984. All though his passport identifies him as a British Citizen, Tom Leonard sense of his own cultural identity is thoroughly Scottish. Almost Leonard's poetry is written in his Glasgow dialect. His aim has always working class "West of Scotland speech that is still poetry". ...read more.

The poem seems to be spoken by BBC news reader 2. He/she explains why the BBC thinks it is important to read the BBC news in a BBC accent. No one will take the news seriously if its read with voice like/wanna u/scruff. It is not that simple though. 3. He/she speaks here in the accent of an ordinary speaker just the kind of voice the newsreader is rejecting. 4. A newsreader would never really reveal his/her prejudices directly to the viewer in this way. So what the newsreader says in this poem perhaps need to be seen, as unspoken message of the way the news is represented. ...read more.

What effect does this have (especially when you read it aloud)? Does it make the poem sound serious or amusing? Language The poet has played with language in a number of ways, apart from the phonetic spelling. There is almost no punctuation. There is lots of slang and colloquial words (scruff, belt up). The newsreader talks directly to the reader. Standard English is the language formed most usually used by educated English speakers and writers. Standard English started out as a regional dialect of South East England. Together with the accent in which it was spoken- Received Pronunciation- it spread outwards from the South East into all parts of England. This is now the language of status and authority. ...read more.