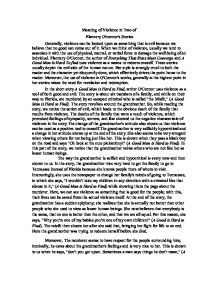 Use of violence in two of Flannery O'Connor's stories

Meaning of Violence in Two of Flannery O'connor's Stories Generally, violence can be looked upon as something that is evil because we believe that no good can come out of it. When we think of violence, usually we tend to associate it with the use of physical, mental, or verbal force to damage the well being of an indvidual. Flannery O'Connor, the author of Everything That Rises Must Converge and A Good Man Is Hard To find uses violence as a means to redeem oneself. These stories usually depict the evil side of the human nature. Her style is strongly cruel to both the reader and the character yet eloquently done, which effectively drives the point home to the reader. Moreover, the use of violence in O'Connor's works, generally at the highest point in her stories raises the need for revelation and redemption. In the short story A Good Man is Hard to Find, writer O'Connor uses violence as a tool of both good and evil. ...read more.

Interestingly, she uses the newspaper to change her family's minds of going to Tennessee, in which she says, "I wouldn't take my children in any direction with a criminal like that aloose in it," (A Good Man is Hard to Find) while showing them the page about the murderer. Here, we can see violence as something that is good for the people; with this, their lives can be saved from the actual violence itself. At the end of the story, the grandmother has a sudden epiphany; she realizes that she is actually not better than other people who she used to view as lesser human beings. She now believes that everybody is the same, that no one is better than the other, and that we are all equal. For this reason, she says, "Why you're one of my babies.you're one of my own children!" (A Good is Hard to Find). ...read more.

To continue, Julian, the son of the mother whose arrogance and self-righteousness blinds him from the fact that he is like his mother as well, tells her that she deserved the hit she recieved from the black angry woman and, in essence, should make her a better person. However, after he realizes that she has been hit really hard and that it is more than just a minor damage her ego, he also realizes that he has made a mistake about the way he treated his mother. In this story, the black woman represents all the anger, ugliness, and bitterness that Julian, his mother, and perhaps many others like them, were holding in their hearts. I believe that her works represents the foolishness of people and is trying to bring some sense into their heads. In essense, Flannery O'Conner's stories brings out the short comings and imperfections of the human nature, in which people try to seek out redemption for. Her style is very interesting and eloquently written. Both these stories raised the need for revelation and redemption, which also displayed an important aspect in our lives. ...read more.