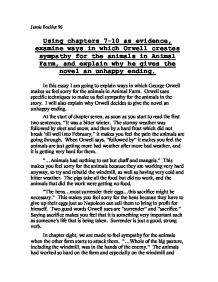 Using chapters 7-10 as evidence, examine ways in which Orwell creates sympathy for the animals in Animal Farm, and explain why he gives the novel an unhappy ending.

Jamie Buckler 9S Using chapters 7-10 as evidence, examine ways in which Orwell creates sympathy for the animals in Animal Farm, and explain why he gives the novel an unhappy ending. In this essay I am going to explain ways in which George Orwell makes us feel sorry for the animals in Animal Farm. Orwell uses specific techniques to make us feel sympathy for the animals in the story. I will also explain why Orwell decides to give the novel an unhappy ending. At the start of chapter seven, as soon as you start to read the first two sentences, "It was a bitter winter. The stormy weather was followed by sleet and snow, and then by a hard frost which did not break 'till well into February," it makes you feel the pain the animals are going through. When Orwell says, "followed by" it makes you feel the animals are just getting more bad weather after more bad weather, and it is getting very hard for them. "...Animals had nothing to eat but chaff and mangels." This makes you feel sorry for the animals because they are working very hard anyway, to try and rebuild the windmill, as well as having very cold and bitter weather. ...read more.

In chapter nine: "Boxer refused to take even a day off work." Everyone is rebuilding the windmill and Boxer is refusing to stop working even though he has got an injured hoof. He worked very hard anyway and now he feels it is his job to rebuild the windmill and he does not even want a day off work. He is too stupid to realise that he could badly hurt himself if he tried too hard, especially with an already injured hoof. "Once again all rations were reduced, except those of the pigs and dogs." The pigs and dogs do not work on the windmill or on the farm much, but they are getting more food than any other animals. The animals are working again to rebuild the windmill, in even worse conditions, and they have less food then the pigs or dogs who do not do any work. "...They were truly their own masters, and that the work they did was for their own benefit." The animals do not realise that they are doing all this work and getting nothing out of it for themselves. They are clearly not doing this work for their own benefit because the pigs and dogs are the only ones who get anything from it even though the other animals do all the work. ...read more.

They probably know that they are trying to hard, but they believe that they can make their lives better because Napoleon tells them they can, if they work hard. "Amazed, terrified, huddling together..." This is three reactions of the animals being scared. By using these three descriptive words right at the start of the sentence, it makes you feel sorry for the animals and how scared they must be, straight away. "Some animals are more equal than others." This does not make sense but the animals read it and think that because it is a commandment it must be true, and that Napoleon and the other pigs and dogs have the right to tell them what to do, just because it says so in the commandment. This story is all related to the Russian Revolution. The animals all correspond to one of the main leaders in the Russian Revolution, the story is called an allegory. George Orwell gives this novel an unhappy ending, because he is trying to make us realise that revolution is not a good thing and the end result of revolution is usually bad. In this story, the bad end result was that the pigs ended up taking over the farm, when the humans went, and they started to control all the animals. At the end of the story it is said that the pigs were actually starting to turn into humans. ...read more.