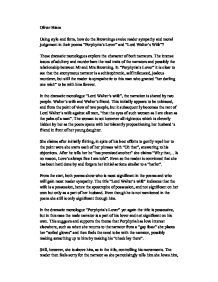 Using style and form, how do the Brownings evoke reader sympathy and moral judgement in their poems &quot;Porphyria's Lover&quot; and &quot;Lord Walter's Wife&quot;?

Oliver Hiam Using style and form, how do the Brownings evoke reader sympathy and moral judgement in their poems "Porphyria's Lover" and "Lord Walter's Wife"? These dramatic monologues explore the character of both narrators. The intense issues of adultery and murder bare the real traits of the narrators and possibly the relationship between Mr and Mrs Browning. In "Porphyria's Lover" it is clear to see that the anonymous narrator is a schizophrenic, self infatuated, jealous murderer, but still the reader is sympathetic to this man who granted "her darling one wish" to be with him forever. In the dramatic monologue "Lord Walter's wife", the narration is shared by two people. Walter's wife and Walter's friend. This initially appears to be unbiased, and from the point of view of two people, but it subsequently becomes the rant of Lord Walter's wife against all men, "that the eyes of such women as I are clean as the palm of a man". The woman is not however all righteous which is cleverly hidden by her as the poem opens with her blatantly propositioning her husband's friend in front of her young daughter. She claims after initially flirting, in spite of his best efforts to gently repel her to the point were she starts each of her phrases with "Oh that", answering to his objections. ...read more.

If he was in the poem towards the end the reader sympathy would not necessarily fall with the woman as he could remind the reader of her immorality concerning her child. "And Dora, the child, she observes nothing, although you should please me and stay". But as his role in the poem is finished she is allowed to write line after line of hypocrisy, "You take us for harlots, I tell you and not the woman we are". But was it not her intention to be a harlot from the start? The morality of the narrator in "Porphyria's lover" is not as questionable as his sanity. He repeats phrases over and over again trying to convince himself as well as the reader that he did the right thing, "no pain felt she, I am quite sure she felt no pain". After he murders Porphyria with her own hair he sits with her corpse through the night and when he is writing the poem "And thus we sit together now, an all night long we have not stirred". He looks for further reassurance that his actions were right as at the end of the poem he asserts that "God has not said a word". In "Lord Walter's Wife", there are obviously two parties where morality is an issue; Lord Walter's wife and Lord Walter's friend. ...read more.

The reader's judgement of morality therefore is upon Porphyria, the woman who drove this poor outsider to insanity by toying with his emotions. She comes to him "through wind and rain" this metaphor of what Porphyria did before she came to the narrator is ambiguous. Could it depict an affair or another life that she could not involve the narrator in. By nature wind and rain is not a good thing. Whatever it represents it is objective correlative to what will come in the poem, foreshadowing the murder. In the poem "Lord Walter's Wife" as William Shakespeare once wrote, "me thinks thou doth protest too much". In conclusion, it is vital to comment that the evocation of moral judgement and sympathy is heavily influenced by both poets' ability to not only convince the reader of the injustice upon the narrators but to make them forget about or overlook the narrators' palpable transgressions. In Lord Walter's Wife, Elizabeth Browning leaves the reader not shocked at the narrator's licentious exploits, but in concurrence with the narrator's opinion of men being hypocritical and s****t. Similarly, in the poem "Porphyria's Lover" the reader forgets about the murder and is sympathetic with the fact that the murderer was so desperate for love. This I believe is the key and the power of evocation that Elizabeth and Robert Browning demonstrate in these poems. ?? ?? ?? ?? ...read more.