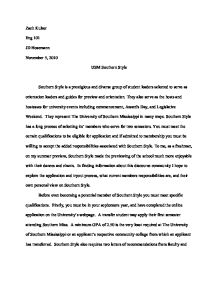 Zach Kulzer Eng 101 JD Hosemann November 5, 2010 USM Southern Style Southern Style is a prestigious and diverse group of student leaders selected to serve as orientation leaders and guides for preview and orientation. They also serve as the hosts and hostesses for university events including commencement, Award's Day, and Legislative Weekend. They represent The University of Southern Mississippi in many ways. Southern Style has a long process of selecting its' members who serve for two semesters. You must meet the certain qualifications to be eligible for application and if admitted to membership you must be willing to accept the added responsibilities associated with Southern Style. To me, as a freshman, on my summer preview, Southern Style made the previewing of the school much more enjoyable with their dances and chants. In finding information about this discourse community I hope to explore the application and tryout process, what current members responsibilities are, and their own personal view on Southern Style. Before even becoming a potential member of Southern Style you must meet specific qualifications. Firstly, you must be in your sophomore year, and have completed the online application on the University's webpage. A transfer student may apply their first semester attending Southern Miss. A minimum GPA of 2.50 is the very least required at The University of Southern Mississippi or an applicant's respective community college from which an applicant has transferred. ...read more.

I wanted to be a part of this because I got so much from the Southern Style leaders when I was a freshman years ago. I was nervous as h**l when I came here..." He continued by talking about a friend he met his freshman year that showed him the ropes, including where his classes are and tips on studying. The influence he received from this friend convinced him to try out whenever he had the eligibility to. "I never realized how hard it was to be in such a prestige group. The application and try out process is very rigorous. Well, long story short, I didn't make it the first time around." This shows how extensive and difficult the application and try out process is and how special it is to be part of the organization. Following his answers I changed the subject to find out if there are any special communication methods within the organization, Lee said, "There isn't necessarily a common way to speak to one another but, of course like every group, there are some inside jokes and nicknames; that's pretty much it." I asked Lee if there were any difference in an average person and a Southern Style member, he stated," No, not at all. ...read more.

While in my interview with Lee I asked him what was his favorite aspect about being a part of Southern Style was. He replied with "True relationships are formed because you are with these peers of yours day in and day out learning about the university and other important aspects, and just having a great experience trying to think of ways to make future students who plan on coming here to the University of Southern Miss enjoyable and welcoming." Being a member helps you learn facts about the school and how much it has achieved throughout its existence. Learning about all of this also helps someone gain an unexplainable amount of respect for their school and the city surrounding it. Southern Style is a community of Southern Miss representatives that follows high standards and represents the University to the highest abilities. Even though the process of selection consists of many extensive requirements and interviews, the individuals selected are a community known as Southern Style. To be a part of it is a highly respected privilege with all the tradition related to this discourse community and how everyone acts and shows their respect towards the group. Throughout my interview and observation processes I have learned an amazing amount of information about Southern Style and I hope to be able to try and apply for a respected spot in this prestigious community. ?? ?? ?? ?? ...read more.