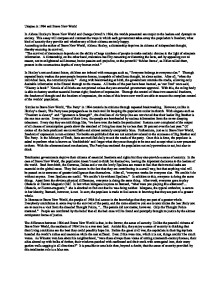 Utopias in 1984 and Brave New World

Utopias in 1984 and Brave New World In Aldous Huxley's Brave New World and George Orwell's 1984, the worlds presented are utopic to the leaders and dystopic to society. This essay will compare and contrast the ways in which each government takes away the population's freedom, what kind of security they provide and whether any of their citizens are truly happy. According to the author of Brave New World, Aldous Huxley, a dictatorship deprives its citizens of independent thought, thereby ensuring its survival, "The survival of democracy depends on the ability of large numbers of people to make realistic choices in the light of adequate information. A dictatorship, on the other hand, maintains itself by censoring or distorting the facts, and by appealing not to reason, not to enlightened self-interest, but to passion and prejudice, to the powerful 'hidden forces', as Hitler called them, present in the unconscious depths of every human mind." In Huxley's not-so-distant future, children are imbued with messages such as, "Everyone belongs to everyone else." Through repeated brain washes the poor people become drones, incapable of rebellious thought, let alone action. After all, "when the individual feels, the community reels." Along with brainwashing at birth, the government controls the media, allowing only desirable information to be filtered through to the masses. ...read more.

In the case of Brave New World, the population doesn't need to think for themselves, leaving the important decisions to the leaders of the world. Bred from birth, the Gammas, Deltas and even the lowly Epsilons are meant to feel that their menial tasks are essential to the global cause. They feel secure in the fact that they are contributing in a small way, but that anything vital will be passed on to someone of greater intelligence than themselves. After all, "everyone works for everyone else. We couldn't do without anyone. Even Epsilons are useful. We couldn't do without Epsilons." In addition to this, everyone is doing the same things. Apart from the obvious physical differences, everyone is doing the same thing. After work, everyone goes to play Obstacle or Electro Magnetic Golf. In fact when Morgana inquires to Bernard, "what were you playing this afternoon?.... Obstacle, or Electro-magnetic," she is shocked to find out that he was doing neither. Morgana, the typical orthodox, is secure in her identity, Bernard, however, is not. In sum, the populace is made to feel secure in knowing that they are part of a greater whole. In likeness to Brave New World, the people of 1984 feel secure in the knowledge that they are part of a greater whole. ...read more.

However, as they experience no love or true joy of accomplishment this is hard to believe. In sum, they believe they are happy because they have nothing with which to compare their standard of happiness. As In Brave New World, the people of 1984 are not happy. In fact The Party feels it no longer necessary to experience such a useless emotion as love. "You are under the impression that hatred is more exhausting than love. Why should it be?" In this future the world will strive off hatred of the enemy, the need to crush the opposition. Already the act of love has been fouled, becoming more of a chore than a desire. In the near future, the bond between mother and child will no longer exist, and soon thereafter, there will be no more mothers only genetically engineered children. As in Brave New World, the populace of 1984 think they are happy, but they most certainly are not. In conclusion, through two classic novels, Brave New World and 1984, this essay was able to examine certain important characteristics of a totalitarian government. Once these characteristics are closely examined, it is clear that the key to happiness lies in freedom. As totalitarians governments take away freedom to provide security, happiness becomes non-existent. Thus totalitarian governments are to be feared, as forewarned by those two great novels. The question remains however; can it be avoided? ...read more.