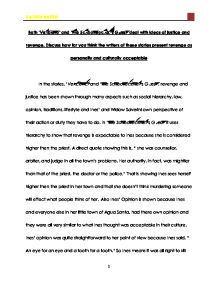 Both 'Vendetta' and 'The Schoolteacher's Guest' deal with ideas of justice and revenge. Discuss how far you think the writers of these stories present revenge as personally and culturally acceptable In the stories, 'Vendetta' and 'The Schoolteacher's Guest', revenge and justice has been shown through many aspects such as social hierarchy, law, opinion, traditions, lifestyle and Ines' and Widow Saverini own perspective of their action or duty they have to do. In 'The Schoolteacher's Guest' it uses hierarchy to show that revenge is expectable to Ines because she is considered higher then the priest. A direct quote showing this is, " she was counsellor, arbiter, and judge in all the town's problems. Her authority, in fact, was mightier than that of the priest, the doctor or the police." That is showing Ines sees herself higher then the priest in her town and that she doesn't think murdering someone will effect what people think of her. Also Ines' Opinion is shown because Ines and everyone else in her little town of Agua Santa, had there own opinion and they were all very similar to what Ines thought was acceptable in their culture. Ines' opinion was quite straightforward to her point of view because Ines said, " An eye for an eye and a tooth for a tooth." So Ines means it was all right to kill the outsider because he killed her son. In 'Vendetta' revenge was mostly shown through Paolo Saverini's widow's lifestyle and the way she has grown up to learn that the style of revenge is acceptable. ...read more.

Ines knew that she felt revenge was the right thing to do because he was all she had left from her fleeting love affair. Ines found it personally excitable for herself to commit another murder for the reason of revenge. In 'Vendetta' Widow Saverini is torn about her son's tragic death. Widow Saverini was very emotional over the death and was left alone with her only companion, her dog, Semillante who stays by her side throughout the whole story. Widow Saverini starts to plan her revenge right away. 'Never fear, never fear, you shall be avenged, my son, my little son, my poor child. You may sleep in peace. You shall be avenged, I tell you. You have your mother's word, and you know she never breaks it.' Widow Saverini says that she promises her son revenge and she gives her dead son her word and tells him she will not break it. Widow Saverini feel that it is culturally and personally acceptable to get her revenge on Nicolas Ravolati who took her beloved son's life away, leaving Widow Saverini all alone to deal with the death of her only son. Having nothing else to do because she is all alone in her lonely, rough town, Widow Saverini plans her revenge imminently. Both women, Ines and Widow Saverini both have there own way of taking revenge upon the murderers of their sons. Widow Saverini, in 'Vendetta' plans immediately to take her revenge, but in 'The Schoolteacher's Guest' Ines takes her time in for her revenge. ...read more.

"The Lieutenant and his men casually made their rounds and then accepted the invitation of the girls at the whorehouse who were celebrating a birthday, they said." So most of the town went on as normal as Ines and Riad Halabi took the body away from the town. The murder Ines did for revenge was illegal it was acceptable in her town because she was so looked up to, her towns people must have thought it was personally and culturally acceptable also. Stories, ' The Schoolteacher's Guest' and ' Vendetta' both deal with ideas of justice and revenge. In ' The Schoolteacher's Guest' revenge is presented through social hierarchy, opinion and community. Ines used each one of those to maker herself and others think that murdering someone for the fact that who she murdered had killed her beloved son. Ines and her community both found it acceptable to community a murder for revenge upon the outsider who took her sons life. This does show how much she cared for her son for taking someone else's life for taking her only son. In 'Vendetta' it certainly showed Widow Saverini's opinion on revenge. Widow Saverini wanted her revenge to be a violent and painful one by the way Widow Saverini thought of the idea. This in some way shows how much she cared for her son. To Widow Saverini this is acceptable personally and culturally for Widow Saverini because in her culture revenge is taken in parts of her beliefs. Revenge is found both in ' Vendetta' and ' The Schoolteacher's Guest' personally and culturally acceptable by the way the author presents them. [LAUREN BAKER] 8 1 Lauren Baker 3 October, 2008 ...read more.