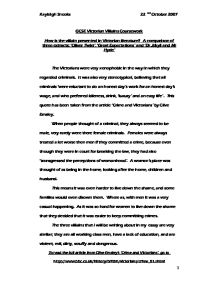 GCSE Victorian Villains Coursework How is the villain presented in Victorian literature? A comparison of three extracts: 'Oliver Twist', 'Great Expectations' and 'Dr Jekyll and Mr Hyde' The Victorians were very xenophobic in the way in which they regarded criminals. It was also very stereotypical, believing that all criminals 'were reluctant to do an honest day's work for an honest day's wage, and who preferred idleness, drink, 'luxury' and an easy life'. This quote has been taken from the article 'Crime and Victorians' by Clive Emsley. When people thought of a criminal, they always seemed to be male, very rarely were there female criminals. Females were always treated a lot worse then men if they committed a crime, because even though they were in court for breaking the law, they had also 'transgressed the perceptions of womanhood'. A woman's place was thought of as being in the home, looking after the home, children and husband. This means it was even harder to live down the shame, and some families would even disown them. Where as, with men it was a very casual happening. As it was so hard for women to live down the shame that they decided that it was easier to keep committing crimes. The three villains that I will be writing about in my essay are very similar; they are all working class men, have a lack of education, and are violent, evil, dirty, scruffy and dangerous. To read the full article from Clive Emsley's 'Crime and Victorians', go to http://www.bbc.co.uk/history/british/victorians/crime_01.shtml The first man is Bill Sikes, he's from Charles Dickens' book 'Oliver Twist'. ...read more.

but Bill does it for opposite reasons. Nancy, Bill's Girlfriend, drops to her knees to show how sorry she is for what she has done to Bill and to show sincere apology to him. She is praying that he will not hurt her for what she has done, and she wants God to tell Bill not to hurt her. 'Let me see them again, and beg them, on my knees, to show the same mercy and goodness to you', she is praying for him to give her another chance, and not to hurt or kill her; she knew he was capable of murder and panicked. Bill Sikes never listened to Nancy as she was praying and begging for him to leave her alone, but he didn't take any notice of her. He 'double-locked the door, and lifting a heavy table against it, drew back the curtain of the bed', now she cannot escape from Bill and nobody can see in because he had closed the curtains. Now he could do whatever he could to her. She 'was lying, half dressed', this shows that she is vulnerable towards Bill as she has nothing to cover her body with. Magwitch is not as bad as Bill Sikes because he doesn't actually kill anyone, he just threatens to. 'I'll have your heart and liver out', this is what he said to Pip as he was tilting him over the tombstone. This makes Pip feel vulnerable and unable to fend for himself. ''You get me a file.' He tilted me again. 'And you get me wittles.' ...read more.

Also the pace speeds up because he is so eager to know who she has been talking to. Bill Sikes uses commands when he goes to see Nancy, also the command he uses when he first comes into contact with her is a mono-syllable. He says 'Get up!' this is a very simple command, but he says is very harshly, with no sympathy. He is very angry with her and wants her to obey all of his commands. Magwitch uses orders and commands more than Hyde and Sikes. He orders Pip to fetch him objects that he will need to survive. 'You get me a file', 'And you get me wittles', 'You bring 'em both to me'. He was also using repetition of the word 'you', it's as though he was telling Pip that if he doesn't get him what he needs then it will be him that will get hurt. There are many terms of lexical field to animal imagery in all three extracts, or if there isn't animal imagery then it is devil imagery. Bill Sikes is compared to a 'wild beast' which is a dog, because of the way he is acting towards his dog. Bill Sikes uses many different references to hell including, 'devil!', 'hell's fire' and 'she devil'. All of the Victorian villains that I am focusing on use these references to hell a lot. Magwitch gets compared to an animal or sub-human because he 'growled', also he said he wants to be an animal, 'I wish I was a frog. Or an eel.' This is a lexical field of animal imagery. He uses references to hell and also references to cannibalism. ...read more.