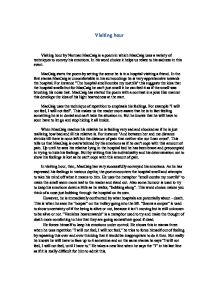 Visiting hour Visiting hour by Norman MacCaig is a poem in which MacCaig uses a variety of techniques to convey his emotions. In his word choice it helps us relate to his sadness in this event. MacCaig starts the poem by setting the scene he is in a hospital visiting a friend. In the first stanza MacCaig is uncomfortable in his surroundings he is very apprehensive towards the hospital. For instance "The hospital smell combs my nostrils" this suggests the idea that the hospital smells but for MacCaig he can't just smell it he can feel it as if the smell was brushing his noise hair. MacCaig has started the poem with a contrast in a joke like manner this develops the idea of his light heartedness at the start. MacCaig uses the technique of repetition to emphasis his feelings. For example "I will not feel, I will not feel". This makes us the reader more aware that he is in fact feeling something he is in denial and can't take the situation in. ...read more.

This is when he sees the "corpse" on the trolley going into the lift. "Seems a corpse" is used to show uncertainty of if the being is alive or not, because it isn't moving but is still unknown to be alive or not. "Vanishes heavenwards" is a metaphor used to try and make the thought of death more comforting to him that they are going somewhere good if dead. He forces himself to keep his emotions under control. He shows this in stanza three when he uses repetition "I will not feel, I will not feel," he tries to force himself out of feeling by repeating this over and over thinking that it would be inappropriate to do it then. But really he knows he will have to face up to it sometime and on the same stanza he says "I will not feel, I will not feel, until I have to." ...read more.

"Eyes move behind eyelids too heavy to raise." He sees himself from her perspective - an intruder who does not fit, is not coping with the situation, and leaves (when the bell rings) feeling useless having brought books and fruit which are useless to her. "Round swimming waves of a bell" is a metaphor but you can see that this is all that she can do now is hear the sounds, which travel in waves, of things about to determine what they are. "Growing fainter not smaller" is a paradox meaning that he is still there but she is drifting away from him, in life, and he is getting blurrier to her now as he stays. In reading this poem I have learned that I am very apprehensive about hospitals. At the start of the poem MacCaig he tries to hide his feelings in his determination to stay strong for himself and his relative. He is very professional in trying to hide his feeling. As the poem progresses his feelings are harder to hold in and keep in. ...read more.