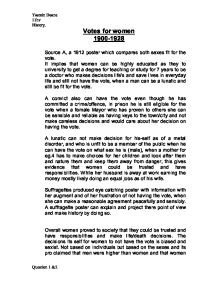 Votes for women 1900-1928 Source A, a 1912 poster which compares both sexes fit for the vote. It implies that women can be highly educated as they to university to get a degree for teaching or study for 7 years to be a doctor who makes decisions life's and save lives in everyday life and still not have the vote, when a man can be a lunatic and still be fit for the vote. A convict also can have the vote even though he has committed a crime/offence, in prison he is still eligible for the vote when a female Mayor who has proven to others she can be sensible and reliable as having keys to the town/city and not make careless decisions and would care about her decision on having the vote. A lunatic can not make decision for his-self as of a metal disorder, and who is unfit to be a member of the public when he can have the vote on what s*x he is (male), when a mother for eg.4 has to make choices for her children ...read more.

'Women were destined to make voters rather than be voters themselves.' She thinks that by destining women to have the vote when they give birth to voters is unfair and that women are at hands injustice of men. 'Women suffer great injustice at the hands of men' and she goes on to suggests that it will always be that women give birth to voters and not be themselves, 'which mothers have reared their sons and still continue to rear them.' Source C is a cartoon, it was written in 1906 by Bernard Partridge. The message is that one is a suffragist and is standing calmly while stopping the other lady who is screaming and acting wild beside her and attempting to crash the 'Great Liberal Meeting' that's been held, it shows that suffragists had a more calmer and reluctant attitude towards getting her point of view across she quotes the suffragette 'YOU help our case? Why, your its worst enemy' which implies that suffragists had a more lady like attitude and that they believed in not proving yourself to be what expect ...read more.

Source B is in favor of the suffragettes explaining that there not all the same and they're judged unfairly as there 'discounted ladies'. In source C the division is between the suffragist and the suffragette in source B. as they believe in different views and different attitudes in away of approaching there goals. Source B blames the suffragists for the problems women face as the way the brought there children up and should have been more clearer of the values of women and they're rights however source C blames suffragettes for the problems women face as they approach the augment as some with force and violence, and proving to Parliament of what they think women were and how they couldn't be trusted with having the vote, and make sensible responsible decisions, and they count suffragettes for all women that's why the suffragist in the carton is holding the suffragette back as she know that the fight to get women the vote will be a losing battle when they see the suffragettes behavior. ?? ?? ?? ?? Yasmin Deane 11hv History. Question 1 &2 ...read more.