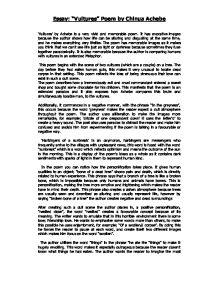 Vultures by Achebe is a very vivid and memorable poem. It has evocative images because the author shows how life can be alluring and disgusting at the same time,

Essay: "Vultures" Poem by Chinua Achebe 'Vultures' by Achebe is a very vivid and memorable poem. It has evocative images because the author shows how life can be alluring and disgusting at the same time, and he makes everything very lifelike. The poem has memorable images as it makes you think that we can't see life just as light or darkness because sometimes they fuse together paradoxically. It is also memorable because the author is comparing humans with vultures in an extended Metaphor. This poem begins with the scene of two vultures (which are a couple) on a tree. The day before they had eaten human guts, this makes it very unusual to locate dead corpse in that setting. This poem reflects the idea of being strenuous that love can exist in such a dull scene. The poem describes how a tremendously evil and cruel commandant entered a sweet shop and bought some chocolate for his children. This manifests that the poem is an extended paradox and it also exposes how Achebe compares this brute and simultaneously lovable man, to the vultures. Additionally, it commences in a negative manner, with the phrase "In the greyness", this occurs because the word 'greyness' makes the reader expect a dull atmosphere throughout the poem. ...read more.

The author utilises the word "things" in the phrase "he ate the "things" to make it hugely revolting. This word makes it especially outrageous because the reader doesn't know what things he has eaten. The author wants the reader to imagine the most horrible things and as everyone has different ideas about our own horror it will make it even more repulsive. By using the word "hollowed" he burns an image in your mind and makes you visualize the hollow bodies that had been devoured by the vultures. The word "Strange" by itself in one line sums up your feelings among the following section of the poem, and by being alone in one line it emphasises the word, it gives the word "Strange" a lot of importance. Achebe shows affection as a pessimistic aspect of life, in the poem it says that love coils up like a snake in a corner, it also says that "love" is upset, angry or punished. Together with the phrase "turned to the wall", the author personifies love. Reaching to a certain point of the poem, the author uses an ellipsis by dividing it into two supposed different stories, however, that's what it seems from the outside, but if you , both stories is related one to another. ...read more.

To conclude, in the last paragraph Achebe summarises the poem. He thanks God that even an 'ogre' (which in society is seen as a stereotype of a malicious creature) has 'a tiny glow-worm of tenderness encapsulated in icy caverns of a cruel heart'. This means that all human kind beings with a dark inside will unfailingly have a spark of mercy in him. Achebe finally expresses that human beings aren't good or bad, they're a combination of both, and this is what the whole poem represents. The poem is made out of one stanza, which is divided into four subsections. This an unusual poem because the poet uses free verse, which makes the poem colloquial. It has no rhyme because rhymes make things amusing and musical and wouldn't help the poet describe pessimistic aspects as he does in the majority of the poem. The four fragments link together evil, goodness, vultures and the commandant. Achebe uses commas and enjambment to make it a slow paced poem to read which makes it sorrowed. The whole poem is written in English by a Nigerian author, it is written for European readers. He wants to show that it doesn't matter from where you belong, every war is the same as abominable and everyone has a bit of light and darkness in their hearts. ...read more.